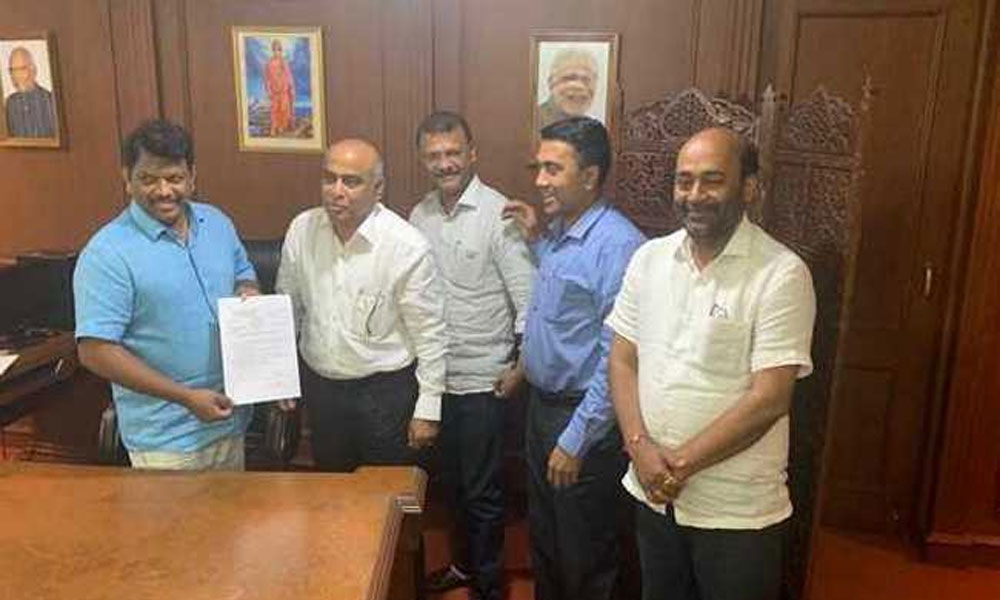 Congress has sharply reacted to the merger.

Panaji: Two of the three MGP MLAs in Goa early Wednesday merged their party's legislative wing with the BJP, which now has 14 legislators in the 40-member state assembly.

Legislators Manohar Ajgaonkar and Dipak Pawaskar gave a letter to merge the MGP legislature party with the BJP to officiating Goa Assembly Speaker Michael Lobo at 1:45 am.

However, Sudin Dhavalikar, the third Maharashtrawadi Gomantak Party (MGP) MLA, has not signed the letter.

While Ajgaonkar is tourism minister, Dhavalikar is a deputy chief minister in the BJP-led state government in Goa.

As two out of the three MLAs have merged the legislative wing, they are saved from inviting anti-defection law, which makes it mandatory that two-third of the strength should agree for the merger.

The legislators broke away from the MGP and formed a group, MGP (two) on Tuesday. They have now merged the legislative unit with the BJP.

Lobo confirmed that he received the letter at 1:45 am from both the MLAs for merging their legislature party with the BJP.

The signature of Dhavalikar is not there in the letter, he said.

The mid-night political drama has increased the strength of the BJP from 12 to 14 in the 40-member House, bringing them on par with opposition Congress which has an equal number of MLAs on the floor.

The MGP is an alliance partner of the BJP in Goa since 2012.

Pawaskar said the resolution to split from the MGP and create another faction was taken by him and Ajgaonkar at 5 pm Tuesday.

"After adopting the resolution, we approached Chief Minister Pramod Sawant with the letter, who instructed us to submit it to officiating Speaker Michael Lobo," he told PTI.

The letter was finally handed over to Lobo at 1:45 am Wednesday, Pawaskar said.

The decision to split the legislature party and merge it with the BJP was taken "in the interest of the people", the MLA said.

"People from my constituency wanted that I should join BJP. We were also resigned to the fact that we could not take the MGP forward in the state," Pawaskar said.

He claimed that he would get a ministerial berth in the Pramod Sawant-led Cabinet.

Sawant is expected to drop Dhavalikar from the Cabinet later Wednesday, a senior official from the Chief Minister's Office said.

Dhavalikar is likely to be replaced by Pawaskar.

MGP is an ally of the BJP in the Pramod Sawant government with all the three MLAs supporting him along with legislators from Goa Forward Party and Independents.

Sawant, who faced floor test last week after the death of chief minister Manohar Parrikar, was supported by 20 MLAs as against 15 from the opposition.

Speaking to PTI, he on Tuesday alleged that one of his party's officer-bearers was "made to issue a letter" to the governor and speaker declaring authority over the entire legislative affairs of the outfit.

Dipak Dhavalikar said the MGP central committee would meet on Wednesday afternoon to chalk out its future course of action, which, he claimed, can decide the fate of the state government.

Congress has sharply reacted to the merger.

"BJP has proved that it is a threat to all its allies," Congress's Goa chief spokesman Sunil Kawthankar said.

"This is a clear indication to all NDA partners all over the country just before Lok Sabha election that any partnership with BJP will be detrimental to the existence of their own party," he added.