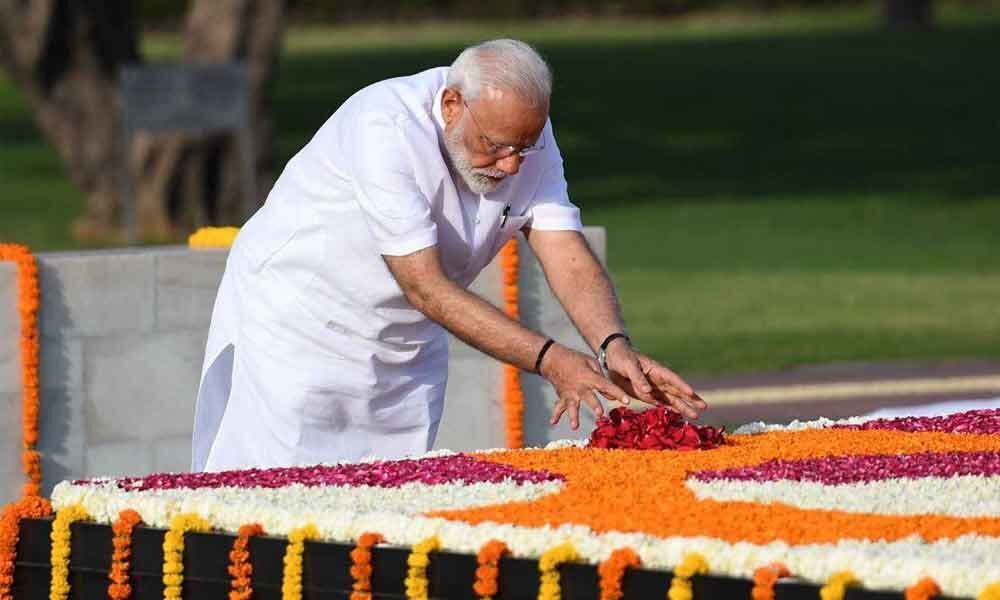 Earlier in the day, Modi also paid tribute to Mahatma Gandhi ahead of his swearing-in ceremony today evening.

New Delhi: Prime Minister Narendra Modi on Thursday visited the National War Memorial here and paid tribute to the jawans who laid down their lives for the country post-independence.

The 68-year-old stalwart leader is set to take oath as the Prime Minister of India for the second consecutive term today. President Ram Kovind will administer the oath of office and secrecy at the function.

Modi has reached out to BIMSTEC (Bay of Bengal Initiative for Multi-Sectoral Technical and Economic Cooperation) member-states, whose leaders have confirmed their attendance for his swearing-in ceremony.

The BJP, which won 282 seats in 2014, improved its tally by notching up 303 seats. Along with its NDA allies, the number swelled to 353 in the 543-member Lower House of the Parliament.

Modi on February 24 inaugurated the memorial located next to India Gate in the heart of the national capital.

The state-of-art monument spread over an area of approximately 40 acres dedicated to soldiers who laid down their lives defending the nation during Sino-Indian war in1962, Indo-Pak wars in 1947, 1965 and 1971, Indian Peace Keeping Force Operations in Sri Lanka and in the Kargil Conflict in 1999.

Likewise, 16 walls have been constructed in the Tyag Chakra for paying homage to the 25,942 battle casualties.

The names of soldiers who have made supreme sacrifice have been inscribed in golden letters on granite tablets arranged in a circular pattern which symbolises the ancient Indian war formation 'Chakravyuh'.

The outermost circle called Rakshak Chakra comprises rows of more than 600 dense trees with each tree representing many soldiers who guard the territorial integrity of the nation round-the-clock.

The construction of a memorial had received in-principle approval of the Union Cabinet at a meeting chaired by Prime Minister Modi on October 7, 2015.