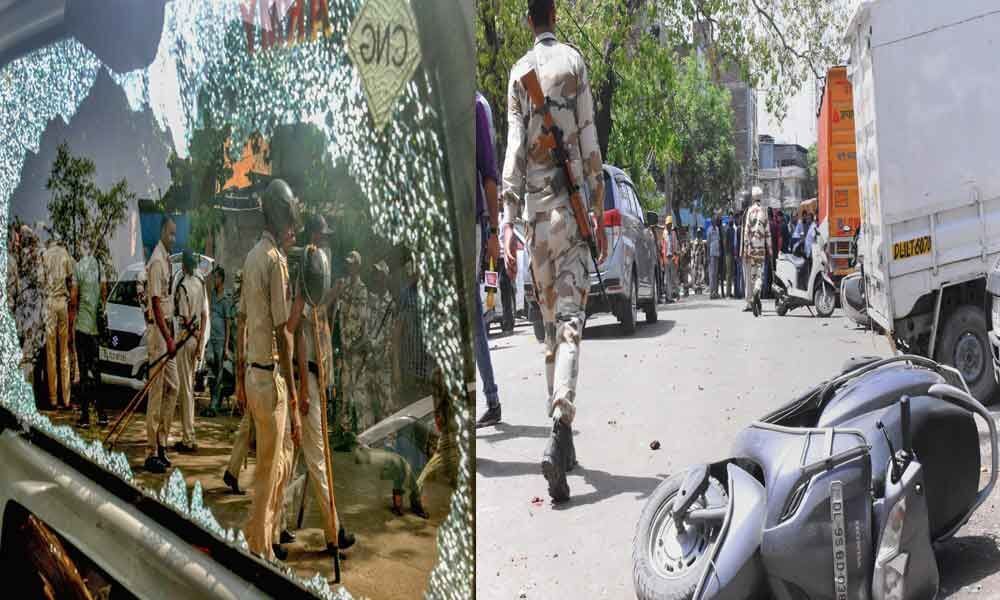 Around 14 officials, including an ACP, were injured after clashes broke out between security personnel and local scrap dealers during a sealing drive in west Delhi’s Mayapuri area on Saturday, leading to a political slugfest between the ruling AAP and the BJP.

New Delhi: Around 14 officials, including an ACP, were injured after clashes broke out between security personnel and local scrap dealers during a sealing drive in west Delhi's Mayapuri area on Saturday, leading to a political slugfest between the ruling AAP and the BJP.

The Aam Aadmi Party (AAP) shared a video on Twitter purportedly showing security personnel resorting to stone pelting, which Chief Minister Arvind Kejriwal dubbed as "extremely shameful". "It is extremely shameful that the citizens are being treated in this manner by the Centre.

The trader community has always supported the BJP with money as well as with votes. But in return, the Centre-led police brutally beat up the traders sending a clear message that they do not want the community's support in the upcoming polls," the Chief Minister tweeted. Delhi Congress chief Sheila Dikshit also "condemned" the use of force by police and blamed the Centre and BJP-led civic bodies for sealing.

BJP leader and Union Minister for Housing and Urban Affairs Hardeep Singh Puri said the violence was due to the "failure" of the Kejriwal government and that the National Green Tribunal (NGT) order to seal the polluting units in Mayapuri came only after the AAP dispensation's "inaction" in relocating the scrap industry.

On Saturday morning, a sealing drive was started by the sub-divisional magistrate (SDM), Delhi Cantonment, along with the staff of the South Delhi Municipal Corporation (SDMC) and the Delhi Pollution Control Committee (DPCC) in the Mayapuri scrap market in pursuance of the NGT order, a senior police official said.

"Some scrap dealers started protesting against the sealing. They got violent and resorted to stone pelting. Security personnel retaliated with baton-charge but did not pelt stones on the protestors," the police official added.

The sealing drive came after the NGT slammed the Delhi government on Thursday for not acting against illegal scrap industries in Mayapuri that cause pollution. A bench headed by NGT Chairperson Justice Adarsh Kumar Goel had directed the chief secretary and the chairman and member secretary, Delhi Pollution Control Committee, to respond why they should not be jailed and prosecuted if illegal activities were not stopped and people kept suffering on account of illegal activities.

The green panel has also ordered the officials to appear before it on May 3 with a compliance report. "Sealing drive was carried out following the directions of the NGT," a senior Revenue Department official of the Delhi government said.

Police said 14 officials -- the SDM, an ACP, three DPCC employees and nine police personnel, including those of the Indo-Tibetan Police Force -- sustained injuries in the incident and had to be taken to a hospital. On the ground, the situation remained tense. Several scrap dealers said the sealing was started without giving prior intimation to the traders.

A number of scrap dealers even gathered outside the Mayapuri Police Station. "The NGT has given a blanket order without distinguishing between polluting units and scrap dealers. Of the notices given to 812 units, only 30 units lead to pollution," a scrap dealer said, requesting anonymity. Another trader said the order was passed by the NGT without doing a proper survey of units leading to pollution.

A third trader said the sealing was conducted while traders were performing a puja on the account of 'navratra" which irked a few of them. One of the largest scrap markets of Asia, Mayauri, located between the Delhi Cantonment and west Delhi's Hari Nagar, has more than 2,000 small and big units.

The incident also gave ammo to the political parties ahead of the Lok Sabha polls scheduled in the national capital on May 12. Terming the incident as "horrific", the AAP hit out at the Centre by drawing a comparison with the Jallianwallah Bagh massacre, whose centenary is being observed on Saturday.

The Jallianwala Bagh massacre took place in Amritsar during the Baisakhi festival on April 13, 1919, when troops of the British Indian Army under the command of Colonel Reginald Dyer opened fire at a crowd of people holding a pro-independence demonstration, leaving several dead and scores injured. "Horrifying!!! General Dyer Modis police brutally pelting stones on the citizens in Mayapuri, Delhi (sic)," the AAP tweeted on Saturday and shared a video clip purportedly showing the incident.