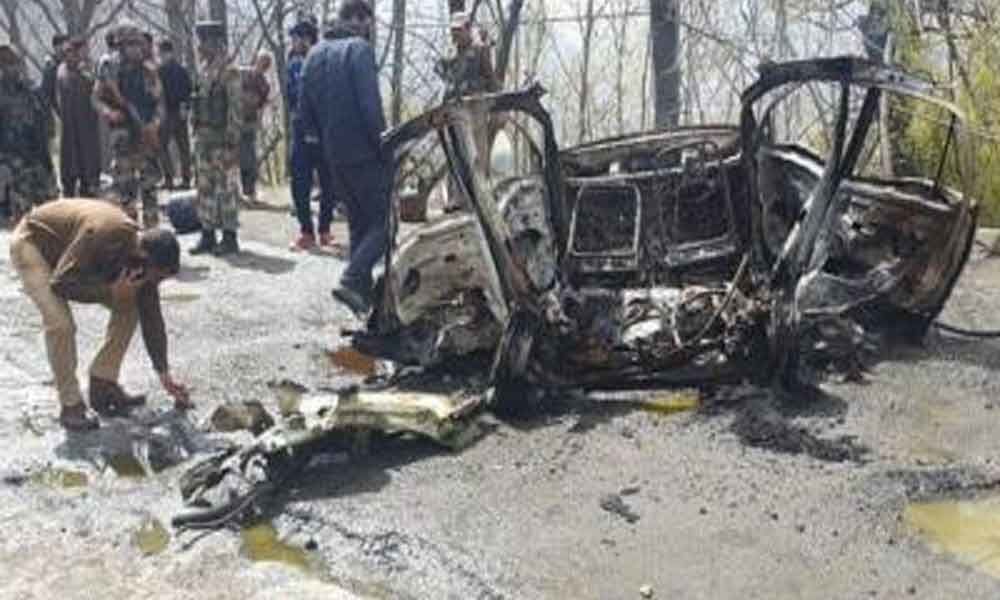 The forensic experts and a team of NIA visited Banihal and inspected the scene to help in the investigation.

Banihal/Jammu: A suspected terrorist, who made an abortive attempt to target a CRPF convoy on Jammu-Srinagar national highway on Saturday, was arrested Monday and is being questioned, police sources said.

A CRPF vehicle had suffered slight damage when a Santro car went up in flames after an explosion at Tethar village, seven kms from Banihal, shortly after a Jammu-bound convoy crossed the Jawahar Tunnel, the gateway to Kashmir valley.

The driver of the private vehicle managed to flee before the fire engulfed the vehicle and turned it into a mangled heap of iron. The inspection of the vehicle and surrounding areas led to the recovery of an LPG cylinders, a jerrycan filled with petrol, gelatin stick, urea and sulphur -- material which is used for fabricating the Improvised Explosive Devices (IED), police said.

A massive hunt was launched and finally the suspected terrorist was arrested in the early hours of Monday and is being questioned, the sources said.

The sources, however, did not reveal whether the arrest was made from Banihal or somewhere else. A letter recovered from the scene had identified the driver as a Hizbul Mujahideen operative, who mentioned his intention to carry out a February 14 Pulwama type terror attack which left 40 CRPF personnel dead after a terrorist of Jaish-e-Mohammad (JeM) outfit drove an explosive-laden vehicle and targeted a CRPF convoy.

The forensic experts and a team of National Investigation Agency (NIA) visited Banihal and inspected the scene to help in the investigation.