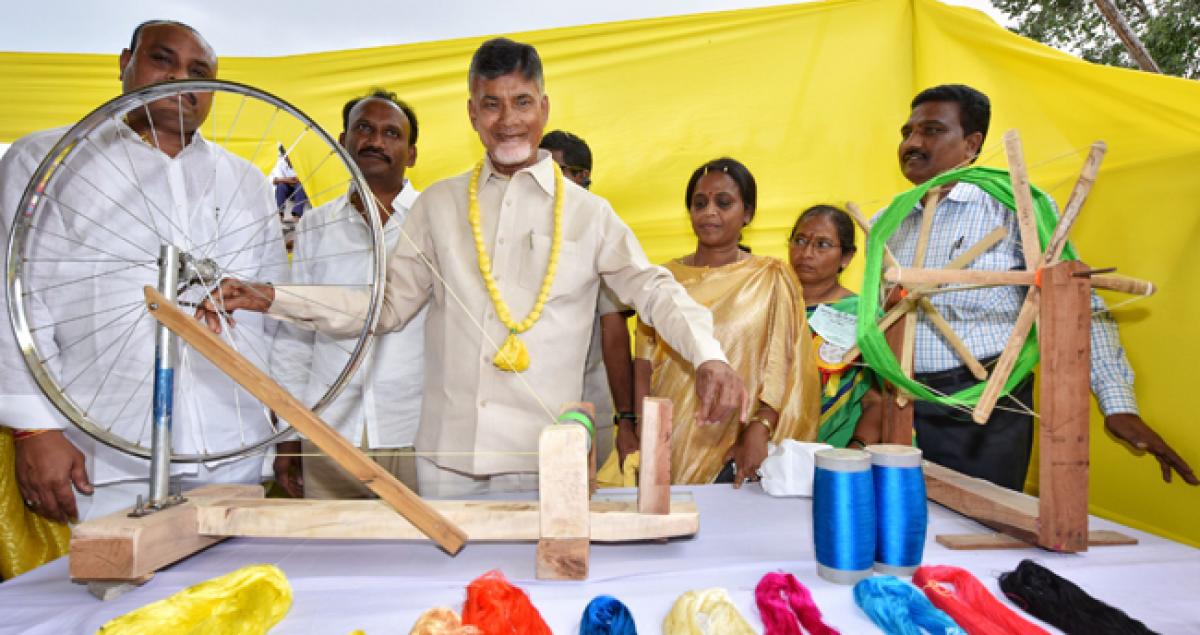 Chirala (Prakasam district): Chief Minister N Chandrababu Naidu agreed to almost every request of the weavers’ community put before him through the local MLA Amanchi Krishnamohan.

He announced that welfare of people from womb to tomb was his government’s policy and promised sops to the people as if it is an election meeting. The Chief Minister participated in the National Handloom Day celebrations here on Tuesday.

Naidu opined that the handlooms industry was the one that was hit badly by the mechanisation and modernisation in the country. He said that after agriculture, weaver community was the largest community that depends on a vocation.

He said that he knows the plight of weavers and was moved by the thousands of the weavers committing suicide. “That is why I waived Rs 111 crore loans of weavers and is giving pensions for more than 96,000 weavers of age above 50 years,” he said.

Naidu remembered Pragada Kotaiah as the man who fought for the welfare of weavers. He mentioned various welfare schemes, including provision of nutrition supplements to the pregnant women, Chandranna Kits, Talli Bidda express to NTR Vaidya Seva to distribution of insurance money within a fortnight of death of insured person under Chandranna Bima.

The Chief Minister announced that he is approving almost all requests put before him and presented a bouquet of concessions to the weavers’ community on National Handloom Day.

He announced Rs 4,000 per month for two months in monsoon season as allowance for the weavers as the pits of the hand looms would be wet with the rain water and no work will be done.

He said that there are individual weavers under 305 societies suffering from debts and he announced loan waiver for them.The Chief Minister also announced allotment of 10 acre of land at Amaravati for weavers community training and other needs, promised to see the dues to APCO from other departments and the government to various societies are released immediately.

He approved the requests to appoint 100 junior technical officers and fulfilling pending compassionate appointments and announced that the government would give surety to NCDC for sanctioning a loan of Rs 150 crore to APCO.

Naidu announced establishment of NIFT at Amaravati and asked the youth from weavers community to utilise its services in making new designs and marketing the products through online service providers. He agreed to construct the procurement, research, training and design center along with establishment of Serifed Center in Chirala. He promised to restructure APCO, apply for GI tag for Chirala saris as soon as possible.

The Chief Minister said that he was working relentlessly for the welfare of the poor and the downtrodden in the state without compromising on anything. He requested the people to not let the opportunists get a chance to rule the state and ruin everything.