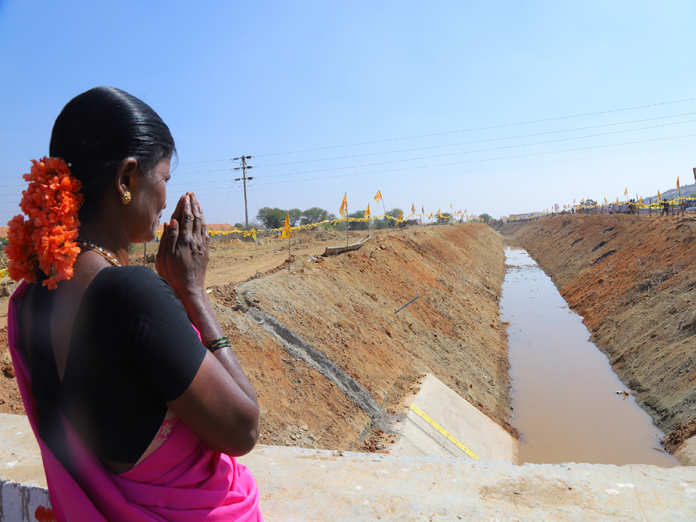 The TDP government, which has fulfilled the threedecadeold dream of farmers of Chittoor district by taking Krishna waters to quench the thirst of parched land, has now announced one more drinking water project at a cost of Rs 2,200 crore

Tirupati: The TDP government, which has fulfilled the three-decade-old dream of farmers of Chittoor district by taking Krishna waters to quench the thirst of parched land, has now announced one more drinking water project at a cost of Rs 2,200 crore.

According to this project, water from the Gandikota reservoir of Kadapa district will be taken to Chittoor district so that the western mandals which also face acute water shortage can be serviced.

Apart from helping the farmers to get water for irrigation, it is also likely to be politically advantageous for the party in this district. The YSRCP had won Punganur, Madanapalli, Piler, Palamaneru, Putalapattu and Chandragiri out of 14 assembly seats in the district in the 2014 elections.

This time the TDP wants to increase its strength and feels that its achievement of taking Krishna water to the doorstep of the farmers and Gandikota reservoir water to Kadapa would reap good benefits to it.

Chief Minister has already directed the Water Resource Department to fill all the minor irrigation tanks by Handri Neeva Sujala Sravanti (HNSS) water before the election notification was issued. More than 15,000 farmers have witnessed the Krishna water release programme at village in Pedda Tippa Samudram on Tuesday.

Explaining the advantages of the HNSS project, Naidu said as part of the Godavari- Pennar linkage, the HNSS project main canal is expected to ease the troubles of the drought-hit Rayalaseema region which depends on Krishna sources through backwaters of Srisailam and covers Kurnool, Anantapur, Kadapa and Chittoor districts. He also asked the farmers to take up horticulture on a largescale as it has the potential to change their economic status in short time.

Ministers Amarnath Reddy and Devineni Uma also have jointly started the campaign over the benefits of HNSS and how the Chief Minister made extra efforts to complete the project in time.

They explained how the Madanapalli division farmers would be benefitted by receiving of Krishna water for irrigation. They also appealed to the farmers and self-help groups to support the TDP for the good work it had despite facing several odds.