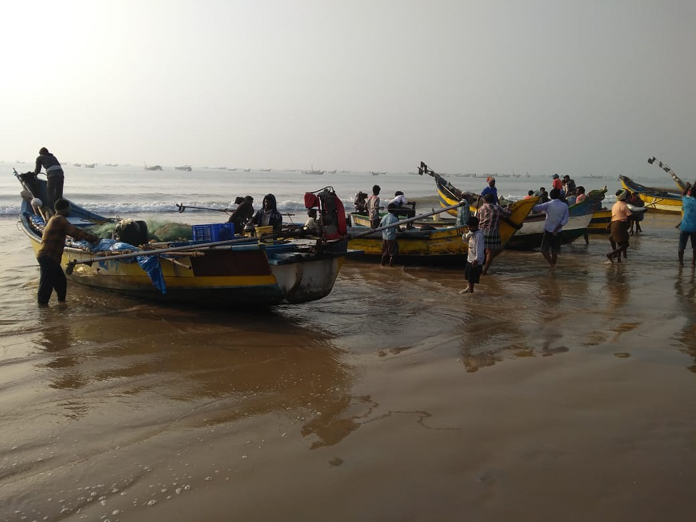 After long range of discussions and recommendations, the Union government approved the notification for Coastal Regulation Zone 2018, in January 2019 By this notification, the Ministry of Environment, Forest and Climate Change has revoked some of the restrictions permitting developmental activities in the environmentallysensitive areas and reduced the no development zones in the coastal areas da

Ongole: After long range of discussions and recommendations, the Union government approved the notification for Coastal Regulation Zone 2018, in January 2019. By this notification, the Ministry of Environment, Forest and Climate Change has revoked some of the restrictions permitting developmental activities in the environmentally-sensitive areas and reduced the no development zones in the coastal areas damaging the livelihood of fishermen.

As the construction of roads along the coastline under Sagarmala Project is getting done, the government started to explore more moneymaking opportunities by promoting the development of infrastructure, real estate, tourism along with permitting affordable housing along the coastline.

The CRZ-2018 notification reduced the no development zone from 200 metres stipulated in 2011 to just 50 metres from the high tide line. It allowed temporary constructions for the promotion of tourism and other development activities. It also accorded permission for defence and strategic projects.

Rakatha Siva, one of the promoters of Vadarevu Fishermen Mutually Aided Cooperative Society, explained that the chemical waste being released from the aqua industries along the coastline is already damaging eggs and fish, as the baby fish grows near shore.

He complained that the CRZ-2018 notification further damages the earnings for the fishermen gradually and kills their future like cancer. He explained that 10 years ago, they used to carry out fishing up to 10 to 20 kilometres, but now they are going to as far as about 30 kilometres on the sea.

He fears that the development of tourism and other infrastructure activity means that they need to go further deep into the sea, risking their lives and also bearing the fuel expenses. He said that they thought that coastal corridor is useful for them for easy transportation of fish but it has also brought struggles for existence with it.

Naidu Prabhu Prakash, former sarpanch of Kothapatnam and a fisherman, opposed the draft committee public meetings for the Coastal Regulation Zone and boycotted them with his people. He said that there are 72 fishermen villages in the coastline of Andhra Pradesh, from Ichapuram to Tada and the community lives within the range of 100 metres from the seashore.

He said that the government was issuing notifications as and when it pleases but neglecting the environmental justice and the survival of the fishermen community, which depends on the sea only.

He said that allowing the tourism projects under the CRZ-2018 notification is nothing but giving powers to the government to move the fishermen villages further far from the established places and allocate the land to construct resorts.

Prakash said they had changed the type of fishing net to save the baby fish and conserve the equilibrium in the sea. But the industrial and tourism activities will damage it, he claimed. He pointed out that the fishermen are unable to work in any other place but sea and that is the reason for 100 of the 300 boats in the village going into the sea daily.

He also said that they were being forced by the management of the newly opened resort to go away from its neighbouring place where they used to dry fish for years. Expressing dissatisfaction over the new notification, Prakash demands the government provide residential education facilities to their children.