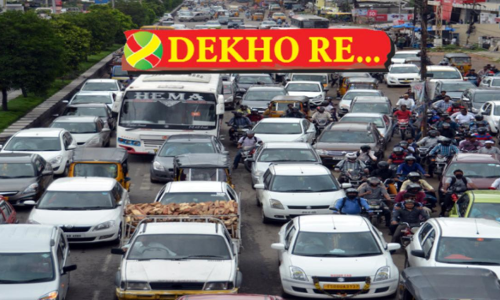 Road infrastructure in the city seems to be crumbling if the number of potholes on rain-battered roads is any indication.

Hyderabad: Road infrastructure in the city seems to be crumbling if the number of potholes on rain-battered roads is any indication.

Numerous potholes on the stretch of road from Nanal Nagar Junction to Shaikpet towards Hi-Tec City junction is not slowing down traffic, but is also delaying office-goers proceeding towards Madhapur and its surrounding areas.

About three lakh motorists, including techies, travel through this stretch during week days to reach the IT hub.

The frequent slowdown of traffic between Tolichowki and Gachibowli is taking a toll on commuters, who accused officials of being insensitive to the travails of office-goers.

Software engineers, who are travelling through this route, complained that the last one week was really back-breaking given the bumpy nature of the road which was dug up to lay drinking water pipelines.

“We are reaching office late despite starting early from our respective places,” said a bunch of techies, who had car-pooled to reach the IT Hub.

On Friday morning, there was a huge traffic jam due to potholes on the all ready worn out road in front of G Narayanamma Womens’ Engineering College at Shaikpet, where commuters were forced to wait for nearly an hour during the peak office hours.

Another bottle neck is at the entrance of Tolichowki flyover, where pedestrians hop on to the roads to reach the other side by intercepting the flow of peak-hour vehicular traffic. D Arun Kumar, software engineer, who uses this stretch to reach office complained,

“The stretch from Narayanamma junction to Dargah junction is terrible. The road here is narrow as it was dug up to lay pipelines. Since then water logging has become a problem here. The overnight rain aggravated things here resulting in large undulations.”

Speaking to The Hans India, Tolichowki inspector (traffic) Satish Kumar said, “Traffic jam at Narayanamma junction is due to water logging. Improper works done by some departments has resulted in this current crisis.”

Part of Singotam temple on verge of collapse