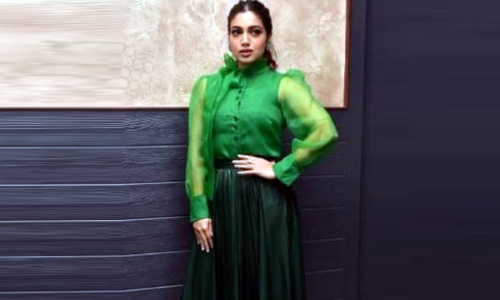 Bhumi Pednekar basking in the success of Sonchiraiya says it has become her personal agenda to break the mold that has been set for leading actresses in Indian cinema.

Bhumi interacted with media during a special session with women at INOX in Mumbai on Friday.

Talking about her journey and choosing such versatile characters Bhumi said, "My journey has definitely been interesting, and all the films that I have done don't really fit into the conventional setting and neither are the characters I have played so far. I think it is a great time for an actor like me. I am constantly trying to push the boundary and break the mold that has been set for leading actresses, and its such great fun. I am so fortunate that I have gotten the films that I have.

It's my personal agenda now to do different films, it's so fulfilling as an actor for me And when you see the audience love it, the kind of response they have its phenomenal. after every film of mine, my social media is flooded with messages and not just from women but men also. Who now understand that a woman is an equal counterpart." she added.

When asked what message would she like to share for the March Women's month Bhumi said, "The biggest message I want to give out is we need to empower ourselves. We can't be dependent on anyone else, we need to be aware of what our rights are and we need to know is there is any kind of injustice happening to you or anyone in your ecosystem. We need to find the courage to call them out."

'Sonchiraiya’ revolves around Chambal dacoits and is set in the 1970s. The film stars Sushant, and Bhumi are seen as dacoits trying to save a life.

The film shot in the Chambal ravines released on 1st March.