Should the Fishermen of UttaraAndhra have to pay for the Failures of Our Policy Makers? 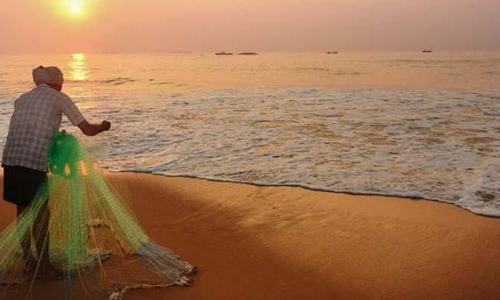 Out of 13 districts in Andhra Pradesh, 9 of them are in the coastal region

Out of 13 districts in Andhra Pradesh, 9 of them are in the coastal region. Except the four Rayalaseema districts of the state, the entire state from Itchapuram in Srikakulam to Tada in the Nellore district, the state of Andhra Pradesh owns the second largest coastal line in India spanning 974 KMs. The coastal region of AP has vast potentiality for fish varieties like Finfishes (84.5%) and crustaceans (14.5%).

Andhra Pradesh registered a Gross Value Addition (GVA) of 11.72 percent to its economy in the first quarter of 2017–18 fiscal in which, fisheries sector alone contributed 42.09%.The national GVA average for this period was only 5.6%. AP is known for aquaculture and prawn culture alone recorded 66.86% growth while marine fishing grew at 4.18%. While the agriculture and its allied sectors registered 26.21% growth, industries sector declined from 10.49 percent in the Q1 of 2016–17 to 8.05% and the service sector grew only by 8.67% during this period. Fisheries alone could contribute a GVA of 42.09% to the state’s economy, contributing to the overall growth of the primary sector as per the government records.

Krishna, East Godavari and Nellore are the top contributors in this sector. It is unfortunate to note that the three Northern Coastal Uttara Andhra districts alone share 355 Kms of coastal line and their contributions furnished below.

The growth of Fishing Sector in three N. AP district in the Financial Year 2017-18

Although the growth appears very consistent, in real terms the growth in the three Uttara Andhra districts is nominal for varieties of reasons. The fishermen that hail from these three districts are on constant move in search of opportunities, despite having plenty of fresh as well as salt water fisheries. The global fact books are showing India as the second largest producer of agricultural products, including fisheries and livestock, contributing 15%, it is necessary to analyze why only a section of the Indian states or districts are able to provide employment and feed its people, while majority are reeling in hunger, poverty and unemployment.

The living standards of the fishermen and fishing communities of the three coastal districts of the Uttara Andhra is evident when the national and the regional media reported the detention of 28 fishermen of Srikakulam in Pakistan for crossing the International marine waters of that country. Although the act was not deliberate, the consequences are quite severe. Not finding enough fishing opportunities due to very poor infrastructure development in their region, fishermen of these three districts in general and fishermen of Srikakulam in particular are migrating to the other parts of India, including Gujarat. Skilled Migrated 30,000 Uttra Andha Fisherman are real backbone to Gujarat 14,000 Crore Fishing Industry. As per my observation Uttra Andhra fisherman are highly skilled because they need it for their survival as there is no other option for their livelyhood. Migrated fisherman are employed on a contract basis for a period of one year by paying certain fixed salaries, which may vary from Rs. 7000 to 12, 000 a month. The sum will be paid in advance to their families and the men are forced to serve as bonded labor. They should venture into the sea irrespective of the seasonal variation for fishing and are forced to live in the mechanized fishing boats for an extended period, known for poor hygiene and absolute lack of facilities. Apart from bearing the atmospheric risks of the marine water, these men are subjected to hardship like hunger, sleeplessness, and deprived of basic minimum facilities like water, toilet and shower for a long time. Unable to clean their bodies and eat nutritious food, they are falling prey to skin diseases and psychological distress.

Factors like extreme poverty, low rate of literacy and skills to pursue other jobs, no access to credit from the organized financial institutions, lack basic facilities like jetties, cold storage plants and fair mechanism to distribute their catch, fishermen of Uttara Andhra are subjected to physical and financial exploitation. Jetties in proposal at Budagatlapalem, Bhavanapadu, Rallapeta of Srikakulam district are pending for a long time. Unable to spend on nets, mechanized boats they are venturing as fishermen on contract basis in other states. Apart from poor wages that is not sufficient to meet their family needs, these fishermen lack benefits like insurance in the eve of mishaps, medical facilities, pension, and welfare measures.

The national budget allocation to the ‘Blue Revolution (fisheries) was a mere 401 crore in 2017-18 as against Rs 13,741 crore for Green Revolution (Farming) and Rs 1,634 crore for white revolution (Dairy ). Marine sector could create vast employment opportunities in fish processing, packing, export, import, cleaning and processing. Fisheries have vast domestic and international market. Given the exclusive verities of fishes like Sardines, mackerel, ribbonfish, carangids (5.7%), seerfish (3.6%) and anchovies the major pelagic landed along the Andhra coast contribute greatly to the state and the national economy. The tuna fishes of Visakhapatnam coast, particularly the yellowfin tuna possesses great commercial value. If the basic infrastructure for fishing is improved, this sector can stall the migration by generating at least 100,000 new jobs in this sector and can contribute additional 10,000 crore yearly revenue to the Andhra Pradesh.