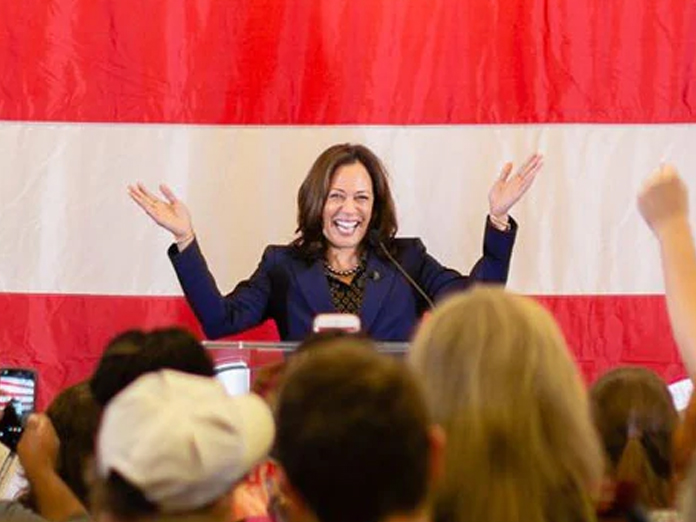 Senator Kamala Harris, who is likely to challenge President Donald Trump in the 2020 elections, has credited her Indian American superhero mother for instilling in her the sense of responsibility that motivates her political career

WASHINGTON: Senator Kamala Harris, who is likely to challenge President Donald Trump in the 2020 elections, has credited her Indian-American "superhero" mother for instilling in her the sense of responsibility that motivates her political career.

Ms Harris is the first Indian-origin Senator in the US. Her mother Shyamala Gopalan Harris immigrated to the US for studies at the age of 19 from Tamil Nadu. She married Donald Harris an African American born in Jamaica in 1938. "It was really my mother who took charge of our upbringing. She was the one most responsible for shaping us into the women we would become. And she was extraordinary," Ms Harris, 54, writes in her book 'The Truths We Hold: An American Journey' that hit the stores this week.

She said that her late mother empowered her to take personal action to fix problems she encountered -- a theme that she says is influencing her political career. Ms Harris, is being seen as a potential strong contender to get the Democratic presidential nomination to challenge Trump in the 2020 elections.

"My mother was barely five foot one, but I felt like she was six foot two. She was smart and tough and fierce and protective. She was generous, loyal, and funny. She had only two goals in life: to raise her two daughters and to end breast cancer," the Senator from California said.

"She pushed us hard and with high expectations as she nurtured us. And all the while, she made Maya and me feel special, like we could do anything we wanted to if we put in the work," Ms Harris said. Maya is the name of her younger sister.

In her second book - for the children - 'Superheroes Are Everywhere" Harris describes her mother as on top of her list of superheroes. "My mom was a superhero because she made me feel special. She believed in me and that helped me believe I could do anything," Ms Harris wrote in the book. She said her mother had been raised in a household where political activism and civic leadership came naturally.

"My grandmother, Rajam Gopalan, had never attended high school, but she was a skilled community organiser. She would take in women who were being abused by their husbands, and then she'd call the husbands and tell them they'd better shape up or she would take care of them," she wrote. Her grandfather P V Gopalan had been part of the movement for India's independence, she wrote.

Ms Harris said her mother inherited her grandmother's strength and courage. People who knew them knew not to mess with either. "And from both of my grandparents, my mother developed a keen political consciousness. She was conscious of history, conscious of struggle, conscious of inequities. She was born with a sense of justice imprinted on her soul," she wrote.

Recollecting her childhood days, Kamala Harris said those early days were happy and carefree. Harris said she was also close to her mother's brother, Balu, and her two sisters, Sarala and Chinni. "They lived many thousands of miles away, and we rarely saw one another. Still, through many long-distance calls, our periodic trips to India, and letters and cards written back and forth, our sense of family-of closeness and comfort and trust-was able to penetrate the distance," she said.

"It's how I first really learned that you can have very close relationships with people, even if it's not on a daily basis. We were always there for one another, regardless of what form that would take. My mother, grandparents, aunts, and uncle instilled us with pride in our South Asian roots. Our classical Indian names harked back to our heritage, and we were raised with a strong awareness of and appreciation for Indian culture," she wrote.

"My mother understood very well that she was raising two black daughters. She knew that her adopted homeland would see Maya and me as black girls, and she was determined to make sure we would grow into confident, proud black women," Harris wrote in her book. Harris was the first woman attorney general of California and the first African American to occupy that position. Former US President Barack Obama described her as a "trailblazer".