US visa duration for Pakistan citizens reduced to three months 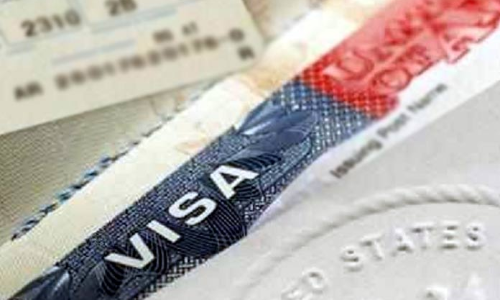 The visa duration for Pakistani nationals has been reduced to three months from five years, said a spokesperson of the US embassy in Pakistan

ISLAMABAD: The visa duration for Pakistani nationals has been reduced to three months from five years, said a spokesperson of the US embassy in Pakistan.

Apart from civilians, the new visa policy will also be applicable to Pakistani journalists. The scribes will be issued visas for three months, ARY News reported quoting the US embassy spokesperson.

The US government has also increased visa application fees for the Pakistani citizens to USD 192 form USD 160.

The move, announced on Tuesday, comes after Pakistan took reciprocal steps in modifying the visa policy for US citizens, including reduction of visa period and fee increment in applying for the document, the spokesperson said.

However, issuance of visas to the government officials will be made in view of their working period by the US administration, the spokesperson added.

The US government had stated that Pakistani diplomats at its embassy in Washington DC and consulates will not be allowed to travel over 40 km from their posts without prior permission, according to ARY News.

Washington has repeatedly told Islamabad that it should take strong and effective steps to stop providing support and safe haven to terrorists operating in Pakistani soil.

This came in the wake of the terror attack in Jammu and Kashmir's Pulwama district on February 14, which claimed the lives of 40 CRPF personnel, the responsibility of which was claimed by Pakistan-based Jaish-e-Mohammad.

The US has also suspended financial aid worth millions to cash-strapped Pakistan for not taking serious steps to tackle terrorism.

DGP Gautam Sawang writes to cops families, thanks them for their...