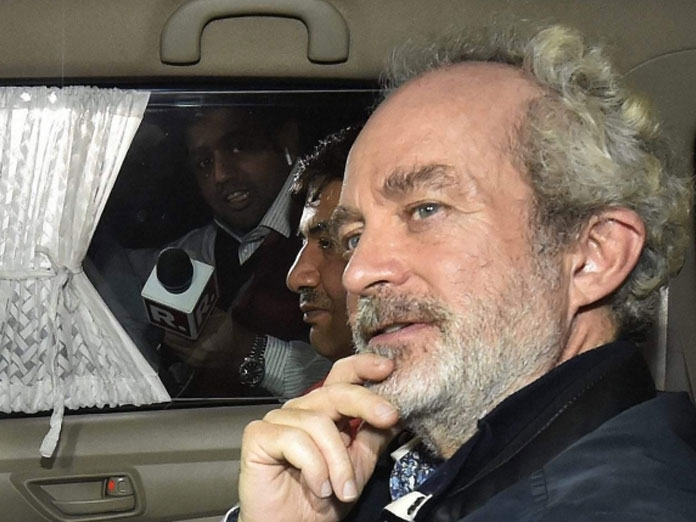 A Delhi court Thursday lashed out at the Tihar Jail authorities for failing to justify shifting of Christian Michel, arrested in the Rs 3,600crore AgustaWestland chopper deal, to a highsecurity cell in isolation, saying it will start an inquiry if it does not get a proper response

NEW DELHI: A Delhi court Thursday lashed out at the Tihar Jail authorities for failing to justify shifting of Christian Michel, arrested in the Rs 3,600-crore AgustaWestland chopper deal, to a high-security cell in isolation, saying it will start an inquiry if it does not get a proper response.

Special Judge Arvind Kumar said Michel has been lodged in jail for last 70 days and what happened suddenly due to which he has now been shifted to the high-security ward.

Deputy Superintendent of Tihar Jail told the court that Michel was shifted to cell number 2 (high-security ward) keeping in mind his safety as it was a high profile case.

However, he failed to justify the sudden shifting before the court.

"Why was there no threat to his security till now. He was kept with other prisoners for 70 days. This was always a high profile case. If that was the case he should have been kept in a high-security ward since the beginning. Tell me why all of a sudden he was shifted to a ward where hardened criminals were kept," the judge asked.

The court directed the Director General (DG) of Tihar to file a comprehensive reply on the reasons of Michel's sudden shifting to the high-security cell and why he was kept with hard-core criminals.

The Deputy Superintendent also told the court that hard-core criminals like Chhota Rajan and Shahabuddin have been kept in the same ward.

"Please convey the message to the DG (Prison) to direct the concerned authorities who is well conversant with the facts to appear before court on March 5 and apprise the court about the specific reasons. Else, I will start an inquiry on it," the judge said.

The jail authority denied Michel's allegations that he was denied common facilities in the new cell-like permission to meet visitors, make phone calls, newspapers and said that though he has been kept in isolation all facilities were provided to him.

Advocate Aljo K Joseph, appearing for Michel, said no security threat was put forward for 70 days since he was in custody.

He claimed Michel was permitted to make phone calls only after his counsel met him, nine days since he was shifted to the new cell.

The court sought the response of the Tihar authorities on this and asked it to submit phone call records if they were contesting the allegations.

The court had on Wednesday sought a detailed report from jail authorities on Michel's plea claiming that he has been kept in solitary confinement in the prison and had asked the superintendent or competent authority to appear before it to respond to the allegation that he was not allowed to interact with co-prisoners.

The plea sought direction to the authorities to treat Michel at par with other inmates and provide basic facilities during his judicial custody.

It claimed that on February 18, the jail authorities conducted a search of Michel's cell to look for a laptop computer allegedly being used by him.

It said no computer was found in the cell.

However, the authorities shifted him to a high-security cell immediately after, it said.

It said when Michel asked for reasons for his "solitary confinement", the jail authorities told him it was the "decision from the top" and there was "serious threat" to his life.

The plea sought direction to the authorities to return his personal belongings, including a diary containing contact details of officers of the British High Commission and documents of the case, which were taken away after the search.

Michel was arrested by the Enforcement Directorate on December 22 after his extradition from Dubai.

On January 5, he was sent to judicial custody in connection with a money-laundering case being probed by ED.

Later, he was arrested by CBI and is lodged in judicial custody in a CBI case related to the chopper deal scam.

Michel is among the three alleged middlemen being probed in the scam by ED and the Central Bureau of Investigation.

The others are Guido Haschke and Carlo Gerosa.