Pakistan must be thankful to India 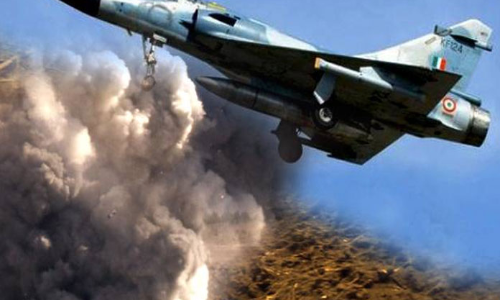 Much long-awaited action by government against terrorism originating from the soil of Pakistan in self- defence and to make the Pakistan government and army realise that our tolerance is over for bearing the brunt of long continuing killing of our jawans. Kudos to Air force and full marks to Modi though many would see the timings of such an action is that of elections and political motive behind it. But even if it is so -a good and much awaited deed must be appreciated. Politics must not play in defence/ national interest matters.

All the country men rightly appreciate this action of targeting about 300 to 325 terrorists and destroying terrorists camp in Balakot Pakistan has proved to be a country alone in the world which assists and promote terrorism. That is why it is also self-victim of terrorism but do not wish to learn a lesson from its fatal consequences. The best for Pakistan is to appreciate Indian action in Balakot to curb terrorism; it would reduce terrorism in Pakistan too! Does Pak government wish so?

It is good that Indian soft approach is over now. It recalls our bold leaders like Sardar Patel, Lal Bahadur Shastri and Indira Gandhi of the period/ times of independence (1947), Indo-Pak war (1965) and liberation of Bangladesh (East Pakistan) -(1971). The world must be united in terrorism-free world. And must get united in destroying terrorists’ camps and killing of all terrorists across the world.

Indian Air Force, well supported by Indian army has made countrymen proud by having a surgical-strike part-II by destroying terror-camps set up by Pakistan in Pakistan-Occupied-Kashmir PoK. Factually speaking, timely step by Indian forces is otherwise also perfectly justified too because Indian forces acted in its own territory – PoK - because complete Kashmir including PoK is integral part of India. Very few people know that even state-assembly of Jammu and Kashmir has vacant seats to be voted by voters in PoK illegally occupied by Pakistan.

Surgical-strike part-II is part of chakravyuh formed by Indian government where already other tough steps affecting Pakistani economy have been taken. Such practical steps will make Pakistani people force their government to come at ease with India. Other steps to abolish Articles 35A and 370 of Indian Constitution will permanently solve Kashmir-problem, because then Indian industrialists will set up industries in Kashmir valley to give employment to misguided Kashmiri youth presently engaged in stone-pelting at Indian forces in absence of adequate employment-opportunities in the valley.

Indian government should arrange fast-track courts and legal proceedings so that anti-national separatists may be sent to their deserved destination at the earliest. Unrest in Pakistan created by tactful policies of Indian government will finish Pakistan from global map creating new break-up nations like Bangladesh

It is extremely good news that days after the deadly Pulwama attack, Indian Air Force on Tuesday early carried out air strike on the biggest JeM training camp inside Pakistan, killing a large number of terrorists. This action was specifically targeted at the JeM camp. The attack was "non-military" strike which took place in a thickly-forested area. It is a good and well-planned step to teach them lesson.

I appreciate IAF, which also means 'India's Amazing Fighters,' as Mamata Banerjee wrote on twitter. This strike told the enemies that there is a limit to India's tolerance. I hope, this brilliant action would stop the flourishing terrorism and the growing extremism throughout the world. Up with India!

Indian Air Force destroyed major terrorist camps in Pakistan, by dropping 1000-kg bomb and killed 200-300 terrorists. It is good news for whole world especially for the people of India. Because the terrorists attacked our army on February 14 in Pulwama and 40 soldiers were martyred. But next time let's not wait for Pulwama or Uni to do what's needed to be done. We should be proactive to strike out terrorism