You are my 'maalik': PM Modi launches projects worth over Rs 550 cr in Varanasi 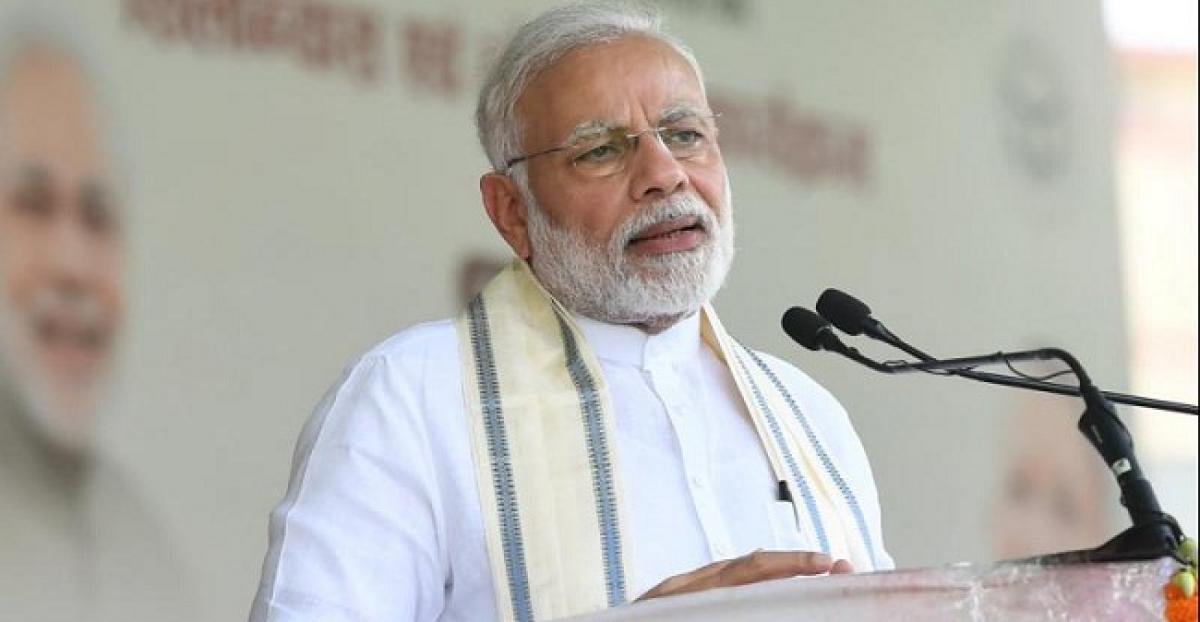 Prime Minister Narendra Modi on Tuesday launched development projects worth over Rs 550 crore in his Lok Sabha constituency, as he gave a detailed account of work done as an MP from this holy city, telling its people they are his master and high command

Varanasi: Prime Minister Narendra Modi on Tuesday launched development projects worth over Rs 550 crore in his Lok Sabha constituency, as he gave a detailed account of work done as an MP from this holy city, telling its people they are his "master" and "high command."

Wrapping up his two-day visit to Varanasi, Modi said the work done in the city is clearly visible, noting its landscape has changed for good in the last four years while it was at the mercy of God under previous governments. After launching the projects, Modi told a gathering that he felt it was his responsibility to present a detailed account of the work done by him in the capacity as an MP from Varanasi.

"You may have given the responsibility of the Prime Minister's post, but as an MP (from Varanasi), I am equally responsible to give an account of work done by me in four years as a Lok Sabha member," he said.

"You are my 'maalik' (master) and high command. And, hence it is my responsibilty to give you a detailed account of every rupee spent."

Modi said his endeavour is to bring a transformation in Kashi, while keeping intact its traditions and preserving its age-old heritage.

"Otherwise you have been witness to the system, when our Kashi was at 'Bholey ke bharosey' (left to the mercy of Lord Shiva)."

Four years ago the people of Kashi had resolved to transform the pilgrim town and today the difference is clearly visible, he said, taking a jibe at previous governments.

In his 40-minute address, the Prime Minister said projects worth Rs 550 crore have either been dedicated to the public or foundation stones laid today.

"This development work not only covers Varanasi but adjoining areas as well."

The projects inaugurated include Integrated Power Development Scheme (IPDS) for Puraani Kashi and Atal Incubation Centre at Banaras Hindu University (BHU). Among the projects for which the foundation stone was laid was the Regional Ophthalmology Centre at the BHU.

Striking an emotional chord with the audience, Modi began his speech in the local dialect and chanted "Har, Har, Mahadev", amid loud applause from the audience at the amphitheatre in the BHU.

"It is indeed a matter of pride for me that I am starting another year dedicated to the country with the blessings of Baba Vishwanath and Maa Ganga. Your affection and blessings always motivate me and also strengthen my resolve to serve you and the countrymen," he said.

"Before becoming an MP, when I used to visit here, I used to wonder when will this city be freed from the mesh of entangled electricity wires hanging overhead. Today, a large portion of the city has been rid of such wires and at remaining places work of laying underground cables is going on at a fast pace," he said.

Terming Varanasi as the gateway to east India, he said, "Utmost efforts are being made to develop Varanasi as a gateway to east India. The endeavour of the Government of India is to link Kashi with world class infrastructure. Today Kashi is glowing in the LED lights. Our emphasis is to develop world class infrastructure in Kashi."

The Prime Minister also garlanded the statue of Pandit Madan Mohan Malviya and planted a sapling.

On the Pravasi Bhartiya Diwas, the Prime Minister said, "In the last four years, people of Kashi have welcomed heads of states of a number of foreign countries. Japanese Prime Minister Shinzo Abe, French President Emmanuel Macron and German president Frank-Walter Steinmeier have praised the hospitality of Kashi in the entire world. Japan has gifted a convention centre to Kashi. "The entire world would be eyeing the hospitality of Banaras at the start of next year, when in January the Kumbh of Indian Diaspora (Pravasi Bharatiya Diwas) will be held in Kashi. For this, the government is working at its own level, but your co-operation will also be necessary," he said.

"From cleanliness to hospitality, we have to set an example, so that it leaves an indelible mark on our pravasi brothers and sisters. I want that they should have such an experience, so that they become tourism ambassador for Kashi forever."

"Road projects worth thousands of crores are going on. Work on Maduadih flyover is complete. The bridge on Saamne Ghat over river Ganga has been built, which has made connectivity better with Ramnagar. The work of widening the Andhra bridge which was stuck has been completed," he said.

Airport in Varanasi too has been witness to the developments going on here, with continuous increase in the number of air passengers and tourists. In the past four years, the passenger traffic at Babatpur airport has increased to 21 lakh from 8 lakh. Modernisation of transport system is going on, so that smart Banaras has smart transport, he said.

Referring to the beautification works, Modi said, "Commuting to and from Kashi has been made easier, and the city has been beautified. Our ghats welcome the guests with glowing lights and not with garbage. Along with boats, cruise has also been possible in Ganga. The campaign of transformation through tourism is going on continuously."

"As an MP, the development of villages for which I am responsible, a major project pertaining to water in Nageypur village has being unveiled," he said.

The Prime Minister also went on to say that Kashi is emerging as a health hub of east India.