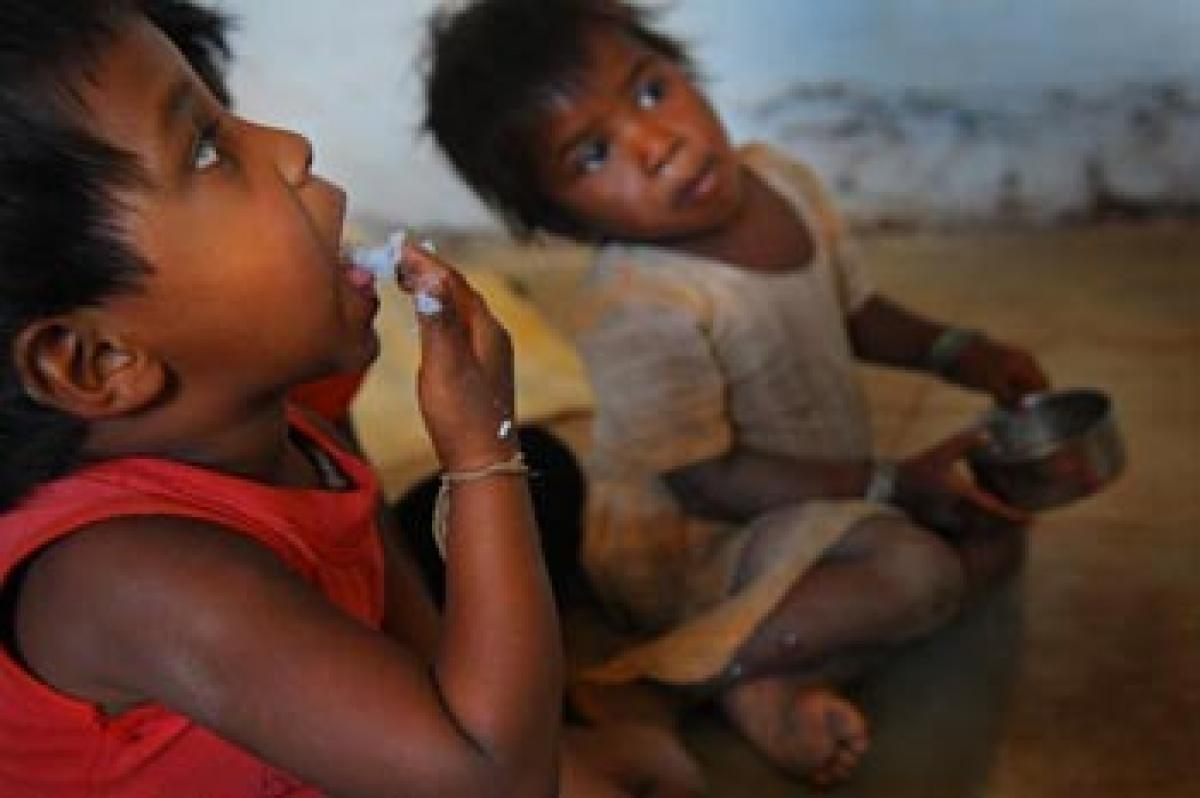 A high severity of malnutrition has marred the Telugu States of Andhra Pradesh and Telangana, according to the latest National Nutrition Monitoring Board Survey which found that 36.6% of children are underweight, while 44.7% of children have stunted growth or are retarded.

A high severity of malnutrition has marred the Telugu States of Andhra Pradesh and Telangana, according to the latest National Nutrition Monitoring Board Survey which found that 36.6% of children are underweight, while 44.7% of children have stunted growth or are retarded.

Around 12 per cent of children of the same age group are found to be severely stunted, meaning they have height which is more than three standard deviations less than the expected height for their age. Stunting rates remain persistently high among children in Telangana around a third, and 40% of the 12-year-old children. They exhibit signs of thinness (under-nutrition).

Stunting is a consequence of and taken as a proxy for malnutrition. Data from the survey indicate that overall there has been some decrease (5%) in the prevalence of stunting among the children (irrespective of gender): 40% of 12-year-old children in the cohort were stunted in 2014 compared with 38% when they were 1-year-old in 2002.

The data has revealed high malnutrition levels in the two States because, as per World Health Organisations’ (WHO) global database on child growth and malnutrition, a 30 to 39 per cent prevalence of stunting is an indicator of severity of malnutrition by prevalence.

The two States have fared poorly when it comes to other indicators of malnutrition, including wasting and underweight. As per the survey, 6 per cent of children below five years were found to be wasted or having weight that is more than three standard deviations less than the expected weight for their height. Also, 6.8 per cent of children from rural residences were found to be wasted as against 5.6 per cent among those from urban households.

Even in this category, Dalit children below five years were more malnutritioned with 7.3 per cent of them suffering from wasting. However, as per the WHO’s child database, 5 to 9 per cent prevalence of wasting is indicative of medium severity of malnutrition.

While there are a host of State-run programmes to improve child health, including the largest outreach programme of its kind in the world, which is Integrated Child Development Services (ICDS), under nutrition among children still continues to haunt Telangana and Andhra Pradesh, say public health experts.

It is found that there is lack of infrastructure in Aanganwadi centres in AP and TS, with regard to supplies and trained staff. There is also inappropriate focus of Aanganwadi workers that had a detrimental impact on the consistency or fidelity of the programme.

The study also suggests other findings that the food intake of poor children is changing. Children in both states are eating poorer quality of cereals and less pulses, legumes and nuts. Besides this, clean water and good sanitation is crucial for children’s healthy development and to reduce the burden of disease and malnutrition.