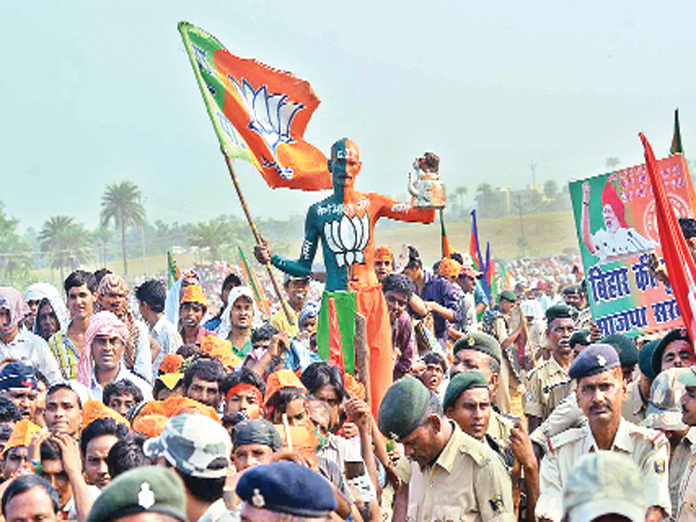 North India, to be precise the Hindi heartland, will continue to be the region which the BJP would look at to get the highest number of its candidates elected from. But as it almost reached the highest possible in the State in 2014, even in the most favourable political circumstances it would be difficult for it to repeat this performance.

In 2014, the political scenario was favourable for the BJP and the NDA. There was a strong sentiment against the Congress throughout the country; there was no third front or any kind of understanding between the regional parties even at the State level. In such a scenario, the BJP-led NDA could convincingly present itself as the alternative to the Congress and the UPA. Further, as the BJP had a strong base in North India, it could leverage this political opportunity here.

In 2019, the BJP doesn't have a similar advantage, and whatever anti-incumbency exists is aimed at it alone. The Congress, after losing several elections since 2014, has made an excellent comeback in the last one year. This is evident in its recent wins in the three important Hindi heartland States.

The third front, which has been discussed for long, may finally take form now. So, there is likelihood of three political fronts in the 2019 election. However, there seems to be an understanding being developed among the Opposition parties across the two fronts to ensure a one-on-one contest with NDA wherever possible. And it will definitely impact BJP's 2019 prospects to some extent, more so in the North India.

In western India as well, the BJP touched the ceiling in 2014, and with a fragile partner in Maharashtra and the Congress being in better shape in Gujarat than it has been in the last 20 years, the best it can expect in this region is to reach closer to its 2014 numbers.

In the south, apart from Karnataka, the BJP has increased its footprint to a little extent only in Kerala and it can expect to win one or two seats here. In Karnataka, unlike in 2014, the BJP will have to face a united Congress and Janata Dal-Secular alliance, and in this scenario, the BJP might be aiming to just retain its 2014 numbers.

In Andhra Pradesh, Telangana and Tamil Nadu, it is still not considered a political force. So, the only regions where it can look to add numbers and compensate for likely losses in northern and western India is the northeast and eastern India. Till a few years back, northeast India, except Tripura, was a strong bastion of the Congress and Tripura was a stronghold of the Communists. In the last four years, the BJP has done a tremendous job there. It has strengthened itself at the ground and has uprooted the Congress and the Communists.

The northeast always had a feeling of being ignored at the national level. Now, probably for the first time in several decades, there is a sense of being valued by the government in Delhi. The Narendra Modi government has started many big-ticket projects for the development of this region and a few of these have been completed on a priority basis. The BJP must be looking to reap the benefits of its hard work in the region and win the majority of seats here with its alliance partners in 2019.

Eastern India, which includes Odisha, West Bengal, Bihar and Jharkhand, constitutes 117 Parliamentary seats. In 2014, the NDA had won 46 seats here, and the BJP's number was 37, but the majority of these wins were from Bihar and Jharkhand. Out of 63 seats in West Bengal and Odisha, BJP/NDA had won just three seats. The Congress party has not been able to revive itself in this region and is considered only a marginal force. The regional parties are strong and there will be a direct contest between the BJP/NDA and the regional parties.

In Bihar, in 2014, the BJP had won 22 seats, and the NDA tally was 31. It was a triangular contest which had benefited the NDA. With major realignments since then, 2019 will be a direct contest between the UPA and the NDA, and NDA must be aiming to at least retain its numbers.

In Jharkhand, out of 14 seats, BJP had won 12 with two going to JMM. The current BJP government in the State is the only one set to complete its term and has no corruption charges. The BJP must be looking to retain its position here as well.

Now let's look at Odisha, which is strategically very important for the BJP's 2019 plans. It has been a stronghold of Naveen Patnaik's Biju Janata Dal (BJD), who has been ruling the State for last 19 years.

In 2014, the BJD had won 20 out of 21 seats and one seat had gone to BJP. The 2019 elections will be the first in the last 19 years when the BJD will be facing anti-incumbency. Many people in the State feel that the BJD being in power for such a long time is deeply entrenched in the system, resulting in favouritism and corruption at every level.

There is resentment in the BJD more than ever. Some senior leaders have left the party. The Congress, which had once ruled the State for a long time, has become a distant third player. So, there is an opportunity for the BJP, which has worked hard in last few years and has established itself as the main Opposition party in the State.

There is lot of talk in the media about Narendra Modi contesting the 2019 general election from Puri, a city which is considered of Odisha's religious capital. The historic Lord Jagannath temple in Puri is the centre of devotion for millions of Hindus not only in Odisha but in the adjoining States as well.

Narendra Modi contesting from Puri may create enthusiasm in the party in Odisha and adjoining states - quite equal to what he had been able to generate in Uttar Pradesh and north India in 2014. The BJP must be looking forward to taking advantage of the anti-incumbency against the BJD government and the popularity of Narendra Modi to win seats in the State.

West Bengal, which sends 42 MPs to Parliament, is another State in eastern India which the BJP must be looking at for bigger gains in 2019. The BJP has been very aggressive here in recent years and has left behind the Congress and the CP-M to establish itself as the main Opposition party in the State.

The local BJP leaders have been picking each and every opportunity to attack the Trinamool Congress and Mamta Banerjee in an effort to gain ground. Many political pundits believe what Himanta Biswa Sarma has done for BJP in Assam, Mukul Roy can do in West Bengal.

West Bengal is high on BJP's agenda and this is crucial for its 2019 plans. Therefore, in case Modi doesn't contest from Puri, there is high possibility that Amit Shah may contest from Kolkata, and it may dramatically change the political atmosphere in the state and impact its prospects in the adjoining States as well.

If the ‘Look East’ strategy works for BJP, it can compensate for likely losses elsewhere - and with some parties joining the NDA post-poll, it should achieve a comfortable majority in 2019. (The writer is a researcher)