Future is in modern cities, not Gandhi’s villages 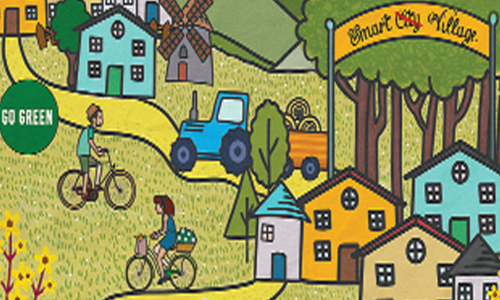 Mahatma Gandhi was right about decentralisation of power to locallevel governments but wrong about villages Perhaps, the context he lived in, made him...

Mahatma Gandhi was right about decentralisation of power to local-level governments but wrong about villages. Perhaps, the context he lived in, made him place great faith in villages as units of India’s democracy. How-ever, if Gandhi were to live today, I am certain he’d readily acknowledge the importance of cities and change his famous utterance from ‘the future of India lies in its villages’ to ‘the future of India lies in its vibrant cities’.

In the past, the fact that cities were at the forefront of civilisations and em-pires is undisputed— take the Indus Valley Civilisation, where cities not only existed but thrived because of robust urban planning and governance; or the towns that predominated the era of Kushans and Satavahanas; or the Delhi Sultanate where towns were centres of trade, commerce and great prosperity.

First, the village economy is largely driven by agriculture. Today, agricul-ture is facing distress and scores of people are migrating to cities. To ac-commodate them meaningfully, cities need to start acting as enablers through jobs, affordable housing, quality infrastructure, and so on.

Second, cities have cluster effects, that is, benefits derived due to individu-als or groups engaging in similar socio-cultural and/or economic activities. For example, Florence in Italy played a pivotal role during the Renaissance where luminaries like Leonardo da Vinci thrived, Birmingham in England facilitated the Industrial Revolution. In India, the automobile manufactur-ing plants are centred around Chennai and the software parks around Ben-galuru.

Third, cities are home to large reservoirs of intellectual capital. There are several public-spirited citizens who are industrialists, entrepreneurs, stu-dents, etc. who are not otherwise concentrated locally. In cities, it becomes possible to leverage their strengths and talents to improve governance.

Finally, bereft of resources and devoid of talent due to migration to urban areas, villages are increasingly shrinking in importance. Low level of eco-nomic activity limits their resource base and they are helplessly dependent on transfers from the State and Union governments.

Therefore, villages in their present form cannot continue. In situ urbanisa-tion must be facilitated wherein a village or a bunch of villages are able to scale-up non-farm economic activities, generate employment and arrest migration to cities. This will not only promote prosperity and economies of scale but would also decongest our heavily burdened urban centres like Delhi, Mumbai or Bangalore.

Now, the next question is - if cities are here to play an important role, how do we ensure they are ready for it? To meaningfully address this question, we must understand the issues of 3F’s and 1C — Functions, Functionaries, Funds and Citizen Participation of our cities’ municipalities.

Functions
18 functions including — urban planning; public health and sanitation; solid waste management; public amenities — parks, street lighting, etc.; roads and bridges; water supply; fire services and so on, come under the jurisdic-tion of municipalities according to Schedule XII of the Indian Constitution. However, the reality is vastly different.

In West Ben-gal, fire services — a Municipal-level function lies with the State govern-ment. In Kochi, the Roads and Bridges department is independent of the Kochi Municipal Corporation — all functions concerning roads are taken over by the State so much so that even bus stops cannot be sanctioned by the municipality.

Consequently, municipalities end up exclusively dealing with only 5–6 functions out of the 18 functions. This is in stark contrast to even an auto-cratic country like China wherein a city like Shanghai controls traffic, police and even the airport among others.

Functionaries
Mayors remain mere figureheads in municipalities while the real power lies with the Municipal Commissioner (who is appointed by the State govern-ment). For instance, in most municipalities, the budgets are decided by the Commissioner.

Similarly, recruitment and appointment of municipal staff are done by the State government. As a result, municipalities have little control over their own personnel. On the other hand, in countries like the USA and the UK, the Mayor is highly empowered, appoints her own staff and has control over municipal personnel.

Funds
When it comes to funds, two problems confront cities — lack of adequate fund devolution and low internal revenue base.

The dependence on exter-nal transfers combined with a low potential for resource generation results in urban local bodies being stuck in a low-level equilibrium trap (Economic Survey 2017–18). There is an over-reliance on property tax and even here, the efficiency of tax collection is low (less than 30% in Bengaluru). Other tax avenues are woefully inadequate and have failed to attune to the chang-ing times. In Kerala, the building tax was last revised in 1992. Since the power lies with the State government, the municipalities cannot do any-thing about it.

The transfer of funds from the Union and State governments is grossly in-adequate. As the 15th Finance Commission officials are presently visiting several states for consultations, the demand for greater devolution to local bodies is reverberant across states.

Citizen participation
Citizen participation is virtually non-existent due to non-functioning of ward committees except in states like Kerala. In Rajasthan, ward commit-tees have been defunct for more than a decade. The overall effect is that participatory governance is stymied. This leads us to the next question of reviving urban centres in India.

Making cities work
First, it is important to either vest all 18 functions of Schedule XII of the In-dian Constitution under the municipality or have a robust coordination mechanism when that’s not entirely possible.

Second, the leadership needs to be empowered — elected Mayor, Mayor-in-Council system (as in Bhopal and Kolkata) or greater autonomy depending on the local context (For example — the Municipality in Kochi can pass a resolution to stall any autocratic appointment of its Secretary (Commis-sioner) by the State government).

Third, there is a need for greater devolution of funds in a rule-based man-ner through Finance Commission transfers and/or greater transfer by the States. At the same time, municipalities must be enabled to augment their own resource base - revision of tax rates and/or levying new fees like park-ing charge, etc.

Fourth, the vast amount of intellectual and social capital of citizens need to be tapped into the framework of urban governance to ensure inclusive outcomes. Kerala is a noteworthy example of citizen participation at the lo-cal level.

It is estimated that more than 60 per cent of our population will live in In-dian cities by 2050. Unless we fix urban governance, neither can cities func-tion well nor can they afford livelihood opportunities to the rising urban dwellers. It’s time for India to act.