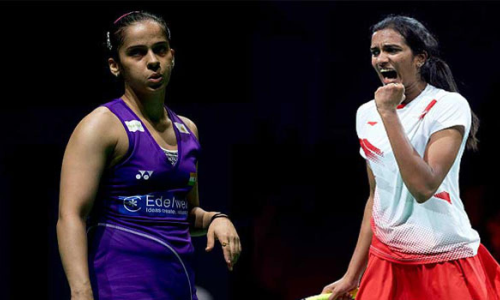 All eyes will be on women\'s singles specialists P.V. Sindhu and Saina Nehwal as they carry India\'s hopes in the Badminton Asia Championships, starting here at the Wuhan Sports Center Gymnasium on Wednesday.While Saina has two bronze medals from the continent\'s marquee event in the 2010 and 2016 editions, Sindhu has a bronze from the 2014 Gimcheon edition.

Wuhan: All eyes will be on women's singles specialists P.V. Sindhu and Saina Nehwal as they carry India's hopes in the Badminton Asia Championships, starting here at the Wuhan Sports Center Gymnasium on Wednesday.While Saina has two bronze medals from the continent's marquee event in the 2010 and 2016 editions, Sindhu has a bronze from the 2014 Gimcheon edition.

Dinesh Khanna is the only Indian to have claimed a gold medal in the Asia Championships, when he finished top in the men's singles category in the 1965 edition in Lucknow.Sindhu, the 2016 Olympic silver medallist, is currently ranked third in the world.The double World Championship bronze medallist has continued her good performance since the Rio Games. The 21-year-old showed that in the India Superseries final when she defeated Rio Games champion Carolina Marin.

Going by the form she is in mentally and physically, this could be her best chance to add another trophy to her ever-increasing CV.The fourth seeded Indian will open her campaign against unseeded Indonesian Dinar Dyah Ayustine.Sindhu's veteran Hyderabad citymate Saina will face a test of character and fitness as she will be eager to prove that she has overcome her stiffness after the knee surgery in August.

World No.8 Saina will hope for a good start when she takes on Sayaka Sato of Japan. Seventh seed Saina has a 6-1 record in career meetings against the unseeded Japanese and the Indian should not have any problem in advancing.In the men's singles, Ajay Jayaram and H.S. Prannoy will be India's flag-bearers. While the world No.13 faces a tough task in the form of Chinese fifth seed Tian Houwei in the opening round, No.29 Prannoy will come up against Hong Kong eighth seed NG Ka Long Angus.The Indian men's doubles pair of Manu Attri and B. Sumeeth Reddy will have their task cut out against Chinese fifth seeded combine of Fu Haifeng and Zhang Nan.