World Cup: Will Uruguay's Edinson Cavani take the field against France in quarter-final? 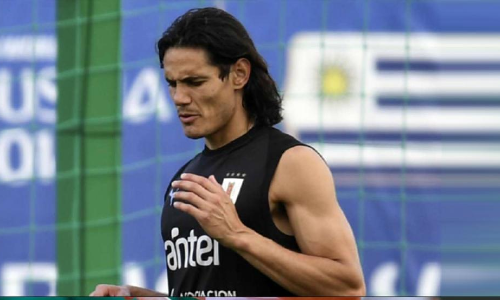 Edinson Cavani trained lightly on Thursday, but his coach would not be drawn on whether the Uruguay forward had recovered sufficiently from injury to have a chance of being fit for Fridays World Cup quarterfinal with France

Edinson Cavani trained lightly on Thursday, but his coach would not be drawn on whether the Uruguay forward had recovered sufficiently from injury to have a chance of being fit for Friday's World Cup quarter-final with France.

Cavani, 31, scored two goals in the Round of 16 win over Portugal, then limped off with a calf injury and has been fighting to get fit in time for the showdown in Nizhny Novgorod.

Cristhian Stuani is likely to replace him in attack if needed, alongside the veteran Luis Suarez. Cavani trained gently, but apart from the rest of the squad, in a session open to media at Uruguay's base just outside Nizhny Novgorod not far from the stadium.

"He's a very important player for us and he was really playing very well. As soon as he got injured, he has worked hard to recover and fulfil his dream," Uruguay coach Oscar Tabarez told reporters. "I'm not going to say anything more about Cavani, I don't want to get into games... Soon you will know who will play and who will be on the bench... Forgive me that you're not going to have all the information, as I have neither about the French."

Tabarez said he had given no thought to the significance of having a referee from neighbouring Argentina, Nestor Pitana, to handle such an important inter-continental match. "It's a coincidence. But we've never won a game with this referee. But I don't want to start these games. It doesn't really matter if he's Argentine or not. He's a good referee."

Asked if two-time World Cup winners Uruguay could go all the way and match the successes of 1930 and 1950, Tabarez said he was only focused on Friday's game against a formidable team. "We know what kind of country we are, how many inhabitants we have, our characteristics, our limitations," he said of the nation of 3.3 million people. "We are never the favourites ... If we think about winning the World Cup, we need to keep that for private moments. If not, it is not good for our focus and our concentration."

In charge of Uruguay since 2006 and through three World Cups, Tabarez had warm words for hosts Russia. "I think this is one of the greatest World Cups organised, and in my personal experience, it's the best ever."