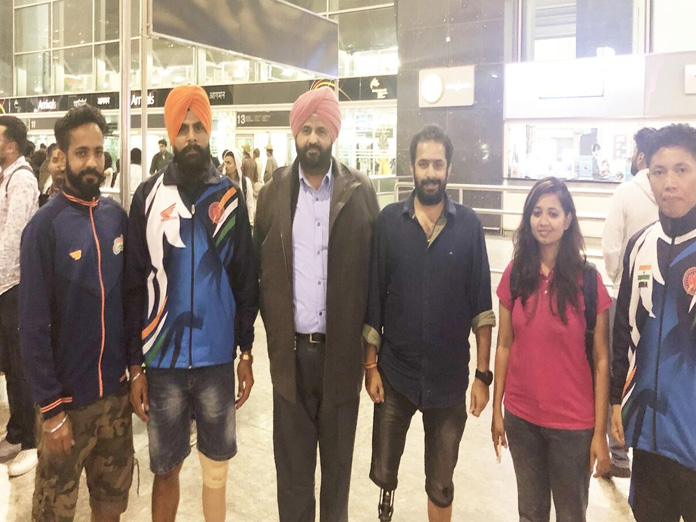 Aditya Mehta Foundation AMF and Cycling Federation of India CFI, on Tuesday announced the ParaCycling Team who will represent India at the 8th Asian ParaCycling Track World Championships, to be held in Jakarta, Indonesia from January 8 to 13 The best ParaCyclists from the Continent will be racing each other at Jakarta to earn the title of Asian Champion

​Hyderabad: Aditya Mehta Foundation (AMF) and Cycling Federation of India (CFI), on Tuesday announced the Para-Cycling Team who will represent India at the 8th Asian Para-Cycling Track World Championships, to be held in Jakarta, Indonesia from January 8 to 13. The best Para-Cyclists from the Continent will be racing each other at Jakarta to earn the title of “Asian Champion”.

Team India will be represented by 3 Para-Cyclists – Harinder Singh, Gurlal Singh and Kaigoulal, a press release said.
Speaking on the occasion, Aditya Mehta – Founder, Aditya Mehta Foundation said, “All three of these Para-Athletes are from our Nation’s Border Security Force. They lost their limbs while on duty for the Nation at the border, or in Naxal Prone Areas”.

These talents were identified by Aditya Mehta Foundation, an NGO which supports Para-Athletes in multiple sports. The Foundation trained them professionally in cycling, and they have already won multiple medals on the International Circuit.

They have been trained by Aditya Mehta himself, who apart from being a double silver medallist at the 2013 Asian Championships, also happens to be Asia’s only certified Para-Cycling Coach. He earned his certification after a rigorous learning process at the World Cycling Centre, headquarters of the UCI. Harinder Singh has two bronze medals to his name from his appearances at the 2017 and 2018 Asian Para Cycling Championships.

Gurlal Singh is the only Indian Cyclist (able bodied or otherwise) to win a medal at the Asian Games level. He won bronze at the recently concluded Asian Para Games. Launched last year, ‘Mission 100’ is AM Foundation’s aim to find and coach the most talented 100 para athletes who can represent India at the Tokyo 2020 Paralympics.

The Para-Cyclists are training and becoming world class athletes due to the support that is being provided by the Border Security Force (BSF), Cycling Federation of India (CFI) and the Aditya Mehta Foundation (AMF). These three organisations have been working hand on hand for the past few years to make India a dominant force in the world of Para Sport and have moved many strides forward already. The team will be joined by Aditya Mehta’s coach K Dathatraye and Physio Asha Shaikh.