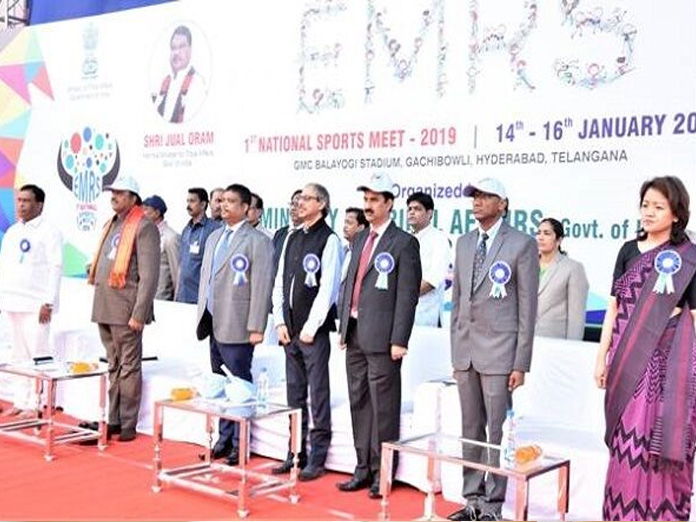 ​Hyderabad: Curtains will be drawn on the 3-day National level Sports Meet for students of Eklavya Model Residential Schools (EMRS) that kicked off on January 14 in the GMC Balayogi Sports Arena located in financial district of Gachibowli in Hyderabad.

The event coincided with Sakranthi, the most important festival of Telugus who reside in the twin States of Telangana and Andhra Pradesh. The event got off on the day celebrated as ‘Bhogi’ while it ends on the day referred to as ‘Kanumu’.

The striking feature of Sports meet has been the platform made available to tribal students studying in EMRS from the remote corners of north east India to Himachal Pradesh in North to Kerala in South and Gujarat in West to exhibit their latent talent in sports which would otherwise not be possible in normal course.

The very sight of so many athletes and sports persons from humble backgrounds striving to give their best has served as an eye opener not only to the organisers but also to officials of State Tribal Welfare Department, Ministry of Tribal Affairs and general public of Hyderabad. It will serve as a motivation to plan similar events in years to come. Local media has prominently covered the sports meet in its pages.

The valedictory event on Wednesday was graced by Jual Oram, Union Minister for Tribal Affairs; Sudarshan Bhagat, Minister of State for Tribal Affairs, Secretary, Tribal Affairs, senior officers of MoTA and Government of Telengana. The programme comprised floral tributes to national leaders by dignitaries, recital of Vande Mataram, Banjara & Koya tribal and folk dance performances and March past by all participating teams, that certainly enthralled the audience.

The Telangana Tribal Welfare Residential Educational Institutions’ Society who are the organisers of the inaugural meet this year have left no stone unturned to ensure a smooth sail by making impeccable arrangements to attend to every facet of this logistically demanding event and indeed set high standards for future host states to match up.

Ministry of Tribal Affairs, Government of India which in the year 2018 had sponsored the first national level music competition at Jamshedpur in Jharkhand has every reason to feel proud and satisfied with one more feather in its cap of continuously striving to present tribal talent on a national platform.