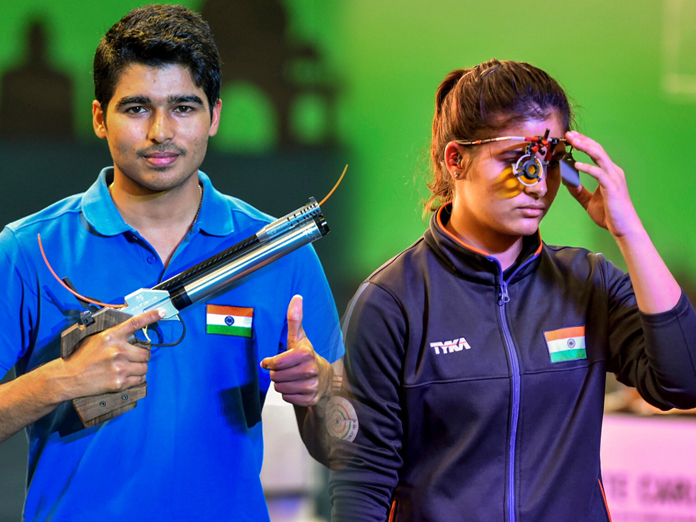 Sixteenyearold boy Saurabh Chaudhary beat the men standing in his way to claim gold with a new record in the ISSF World Cup here on Sunday, securing Indias third Olympic quota, but there was disappointment in store for Manu Bhaker

New Delhi: Sixteen-year-old boy Saurabh Chaudhary beat the men standing in his way to claim gold with a new record in the ISSF World Cup here on Sunday, securing India's third Olympic quota, but there was disappointment in store for Manu Bhaker.

Asian Games and Youth Olympics gold medallist Chaudhary ended the event with a total score of 245. Dami Mikec of Serbia was second in the podium with a score of 239.3, while the bronze medal was bagged by 2008 Olympic champion Wei Pang of China, who managed 215.2.

Such was his dominance in the eight-men final that he finished the event 5.7 points ahead of the silver medallist, the gold assured even before his final shot.

Chaudhary showed no signs of nervousness despite his first senior World Cup outing and started strongly to finish on top with Serbian Mikec at the end of the first series.

In the second series, the champion shooter continued his good form and finished at the top.

“I just tried to keep doing what I usually do. I never thought about the quota or the world record, else I wouldn't be here,” Chaudhary said after his triumph.

Other Indians competing in the event, Abhishek Verma and Ravinder Singh, failed to qualify for the final. Both Abhishek are Ravinder finished with a total score of 576 in the qualification round.

In the day’s last final, Hungary’s Veronika Major created a new world record to clinch the gold medal with a total of 40.

The silver went to Jingjing Zhang of China while Haniyeh Rostamiyan of Iran settled for the third place on the podium. China and Hungary sealed the Olympic quota in this event.

The Commonwealth Games and Youth Olympics gold medallist Manu ended the event with a total score of 22 at the Dr Karni Singh Shooting Range. In the first series, Manu scored 3 out of a possible 5. She found the mark just twice in the second series, slipping to the seventh position.

The multiple World Cup medallist was on target in the third series jumping to the second spot. However, Manu struggled to find the target consistently and finished fifth. She had qualified for the final with a score of 590 while Rahi Sarnobat and Chinki Yadav failed to advance.

Earlier, Chaudhary shot 19 scores above 10. The Indian also holds the world record in 10m air pistol event in the junior category and that is higher than the senior world record he made on Sunday.

In the men's 50m rifle 3 positions event, Indian shooters failed to qualify for the final as Hungary’s Istvan Peni claimed the gold medal.

Parul Kumar was ranked 22nd in the qualification with a total score of 1170, while Sanjeev Rajput finished 25th with 1169.

This was India’s second medal in the tournament, with Apurvi Chandela winning a gold in the women’s 10m air rifle category on Saturday.

Chandela and Anjum Moudgil had secured the first two Olympic quotas in shooting in the ISSF World Championships in Korea last year.