In yet another incidence of Andhra Pradesh State’s high-handedness on Adivasis, the police allegedly went overboard when the tribals practicing ‘Podu’, locked horns with the officials of the forest and revenue departments opposing the alienation of their only livelihood means.

Khammam: In yet another incidence of Andhra Pradesh State’s high-handedness on Adivasis, the police allegedly went overboard when the tribals practicing ‘Podu’, locked horns with the officials of the forest and revenue departments opposing the alienation of their only livelihood means.

There was no truce even when a protesting tribal woman lost her sari in the melee when the police tried to arrest the protestors. The women staged a half naked protest in full view of the public requesting to allow them to till the land on which they were living for decades.

The clash broke out when the forest wing personnel accompanied by revenue and police force tried to dig a trench to fix the boundaries of the forest and revenue land as part of Haritha Haram programme near Bojjayigudem village under Yellandu mandal in Khammam district.

The villagers, who obstructed the digging of trench, contended that they have been in possession of the land for over three decades and are eking out a living by practicing Podu in the said land. While some of the Adivasis have shown their land pattas, the others stated that their applications have been pending with the revenue department. They also alleged that both revenue and forest wing officials had collected bribes from them during the survey of podu land.

As the talks between the forest officials and the tribal’s didn’t make any headway, the impasse turned into an altercation between them. Both the sides jostled with each other when the forest officials tried to start the trench works. The police swung into action and appeared in no mood to relent even when a tribal woman had lost her sari. Around 45 Adivasis, including 17 women, have been arrested by the police. 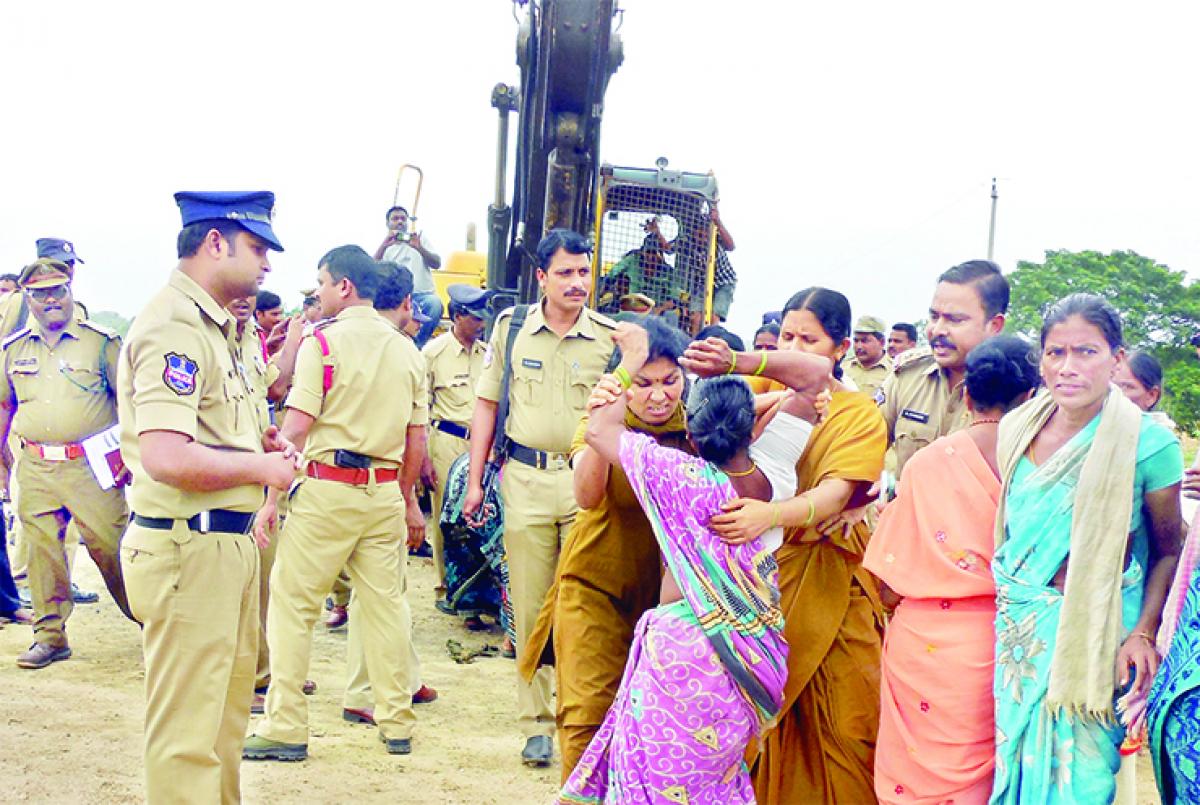 One of the victims Parsa Kotaiah told The Hans India that officials didn’t heed to their request despite their possessing the land for decades. CPI-ML New Democracy district secretary Potu Ranga Rao, who met the Adivasis, demanded an action against the officials of police, forest and revenue for bulldozing the rights of tribals.

Meanwhile, a podu farmer Dharavath Vasram allegedly attempted suicide by consuming pesticide in protest against the government for not granting rights over podu land in their possession for about three decades. The details of his condition are not known when the reports last came in. The Hans India learnt that he is being treated at government hospital in Yellandu.