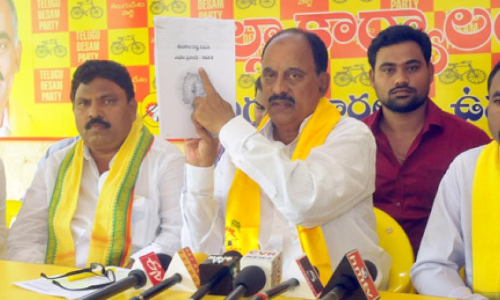 Hanamkonda: Telugu Desam Party (TDP) Politburo member Revuri Prakash Reddy dared the TRS-led State government to release a white paper on what it achieved in its four-year rule during its Pragathi Nivedana Sabha scheduled to be held on September 2.

Speaking to media persons here on Friday, he said that the Telangana Rashtra Samithi (TRS) government failed to fulfil its elections promises. “Chief Minister K Chandrashekar Rao always reiterated that the TRS election manifesto was like the Bhagavad Gita to him.

Does K Chandrashekar Rao remember the double bedroom houses (2BHK) promise of the TRS election manifesto? The government, which targeted 2.37 lakh double bedroom houses, was able to construct only 5,183 houses in little over four years. At this rate, when it will they fulfil promise?” Reddy questioned.

Further he ridiculed the government and stated that not even a single house was constructed in Nirmal constituency, from where Minister for Housing A Indrakaran Reddy represents. This apart, the government also failed to construct a single double bedroom house in 15 districts out of the 31, he said.

“The Chief Minister who visited several slums in Warangal city in 2015 had told slum-dwellers to provide G+1 houses in six months, but failed,” Reddy said. He stated that K Chandrashekar Rao has no moral right to continue in his office.