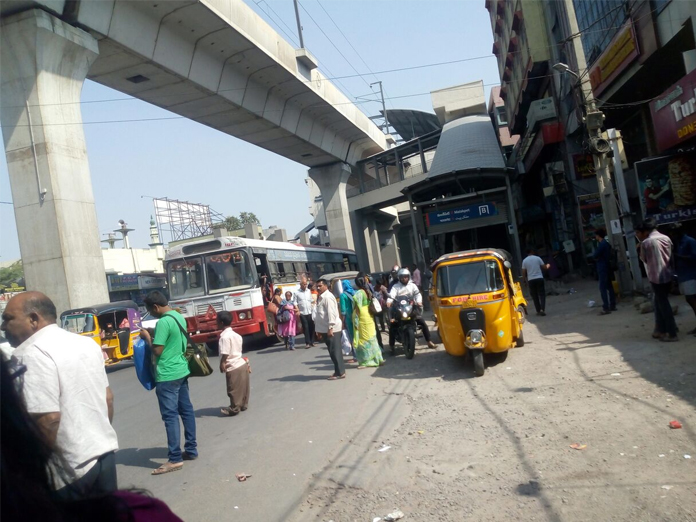 With no proper bus shelter at Malakpets newly constructed Metro rail Station, the commuters waiting for the public buses are at the mercy of the motorists who drive past on the one of the narrowest roads in the city

Chaderghat: With no proper bus shelter at Malakpet’s newly-constructed Metrorail Station, the commuters waiting for the public buses are at the mercy of the motorists who drive past on the one of the narrowest roads in the city.

The area is also a transit point for those going towards Nampally, Koti and all the locations of the new city and Charminar and beyond.

Connecting the routes of Dilsukhnagar, Saidabad on one side and Charminar, Nampally and Koti on the other side, this route has heavy traffic and continues to be a congestion point, owing to the age-old Railway under Bridge (RUB) at Malakpet. Chaderghat is always crowded with public and vehicles.

According to locals, a lot of bus shelters were demolished to construct foot paths and they were not rebuilt.

When it comes to passengers waiting for buses, they have to remain standing in all the seasons without any proper shelter. People commuting through Chaderghat are high in number, but there have been no bus shelters for decades.

“There are no signs to indicate bus stops. It has become a problem to stand on the road waiting for a bus,” said Yadaiah Goud.

“Most of the commuters come to bus stops from offices located nearby.

During evening times one can hardly get a seat. If we can sit in bus stop for a few minutes, then commute in bus will be less stressful,” said Sunitha, a private employee.

“There was never a smooth flow of traffic in Chaderghat. Bus drivers stop buses on the road.

This increases traffic congestion, and we are suffering because of it. Government should take a call to build bus shelters, wherever necessary,” said Ragini, a student.