Outrage over infant’s death at Niloufer 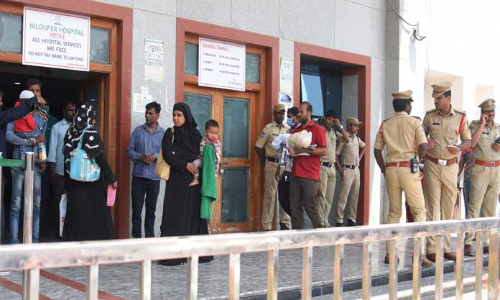 Niloufer Hospital is again in the news for wrong reasons Hundreds gathered at the hospital as news spread that negligence and mistreatment was the cause of death of an infant A misread prescription can lead to death but in this case, it was a case of similar looking packaging

Lakdi-Ka-Pul: Niloufer Hospital is again in the news for wrong reasons. Hundreds gathered at the hospital as news spread that negligence and mistreatment was the cause of death of an infant. A misread prescription can lead to death but in this case, it was a case of similar looking packaging. Due to lack of staff at the govt health centres, paramedics and attenders have been doing multiple roles. With shortage of pharmacists, illiterate attenders depend upon the colour and packaging of tablet packets to disburse the prescriptions to the patients given by the doctors.

On Wednesday, as per the standard procedure, after a vaccination is given to children, it is followed by a dose of paracetamol to prevent fever. But the staff at the Nampally Urban Centre gave tramadol as the packaging was similar to that of paracetamol. This was after 87 children were vaccinated at the centre. Next day, hundreds of relatives of the children protested at the hospital. The moment the news of the death of an infant was broken, it resulted in chaos.

Twenty nine more children were also admitted to the hospital after falling ill, following the vaccination at the same health centre. Of the 25 children who were admitted in the hospital, four of them were said to be in a serious condition and have been placed on ventilator support.

Parents began protesting outside the hospital in the early hours of Thursday, until police reached the spot and dispersed the crowd. According to the Nampally police, no complaint has yet been filed.
Hari Krishna Devari, father of an infant who was brought to Niloufer Hospital, said, “My son is 4 months and 7 days old. We took him to the Health Centre at Nampally for vaccination on Wednesday and we were given tablet Tramadol which was to be given to the child if he gets fever. Next day, as my child’s health was in bad condition, I visited the health centre where I came to know that all the infants who took the tablet after the vaccination were rushed to Niloufer Hospital. So, I contacted the Niloufer Hospital staff and told them about my son’s situation and requested them for an ambulance which they denied. I booked a private ambulance and came here and saw the situation here was chaotic and very bad.” The infants have been kept under observation and treatment is in progress. The next 48 hours are very crucial, according to the doctors at Niloufer Hospital.

In a similar instance, earlier in August 2018, parents of a two-month-old had lodged a complaint after the child died following a vaccine administration. Three other children had fallen sick. At that time, the doctor at the public health centre was suspended for being negligent.