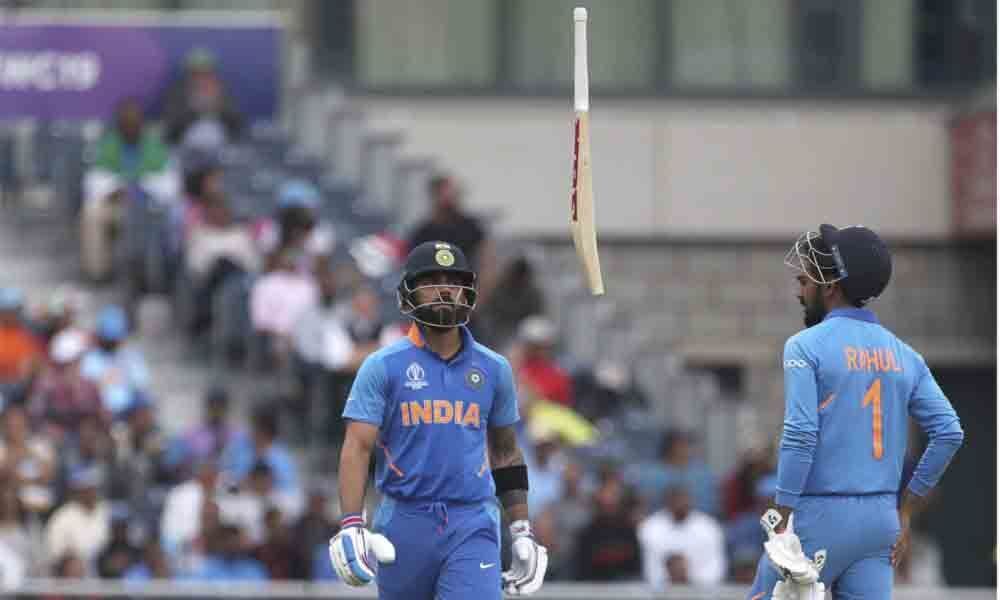 Manchester (PTI): India's famed top-order imploded on a day when it mattered most as a gritty New Zealand survived a swift counter attack from Ravindra Jadeja to win an exciting World Cup semi-final by 18 runs, on Wednesday.

Indian top-order had one failure due and much to their horror, the semi-final proved to be their dooms day. Jadeja (77 off 59 balls) used every ounce of his 'bits and pieces' skill but the 'men in blue' could only get as far as 221 in 49.3 overs in pursuit of 240.

New Zealand made it to their second successive final, with credit going to their pacers' -- Matt Henry (3/37) and Trent Boult's (2/42) -- deadly opening spell and Lockie Ferguson's steely nerve in the penultimate over. The script was eerily similar to the 2015 World Cup semi-final and just like that evening in Sydney, skipper Virat Kohli was once again out cheaply and Mahendra Singh Dhoni (50) was stuck in the middle overs.

Mitchell Santner (2/34) bottled Dhoni up and there was too much left for Jadeja to do even as he smacked four sixes and four boundaries to raise hopes of a turnaround.

Call it irony, Dhoni, in what could be his last international innings, was run-out by a direct throw from Martin Guptill. This was after Dhoni and Jadeja raised visions of an improbable win after adding 116 runs for the seventh wicket, coming together at 92 for six. Jadeja came in under overcast conditions when all looked lost and then wielded the willow like a sword, proving a point to critics like Sanjay Manjrekar in the most befitting manner. Call it a déjà vu but at a time when Jadeja was scripting a near impossible recovery, Kapil Dev was at the Neville Ground in Tunbridge Wells, where it all changed for Indian cricket one morning.

After his angry 140 character rant on social media, it was time for a 24-carat performance. Jadeja let his game do the talking as Kohli couldn't have asked for a better all-round effort. He also took one wicket in 10 overs with his left-arm orthodox spin.

But the recovery post 24 for four was wee bit too much. The chase wasn't a big one but Henry's first spell did upset the applecart once and for all. Man of the Moment, Rohit Sharma (1) got a delivery from Henry that squared him up as it straightened after pitching. The nick was taken by Tom Latham. Kohli (1) looked edgy against Boult, who angled a couple across the Indian captain before bringing his stock delivery that swung in. KL Rahul (1) has never been comfortable against quality seam and swing bowling. It was no different today as Henry bowled one on the good length that deviated late and the opener failed to take his bat away with Latham taking a diving catch. At 5 for 3, India have had their worst start of the tournament and it just got even worse when Jimmy Neesham's outstanding effort at backward point ended Dinesh Karthik's (6 off 25 balls) misery. Rishabh Pant (32) and Hardik Pandya (32) then steadied the ship with a 47 run stand with the left-hander hitting some crisp drives through the off-side cordon. Just when they seemed to have got settled, Pant's impetuosity cost India dearly as his slog sweep was taken by Colin de Grandhomme off Santner. When Pandya was also gone, trying to slog Santner, the end looked near but Jadeja, who joined Dhoni had other ideas..

Mitchell Santner not out 9

Trent Boult not out 3

Jasprit Bumrah not out 0