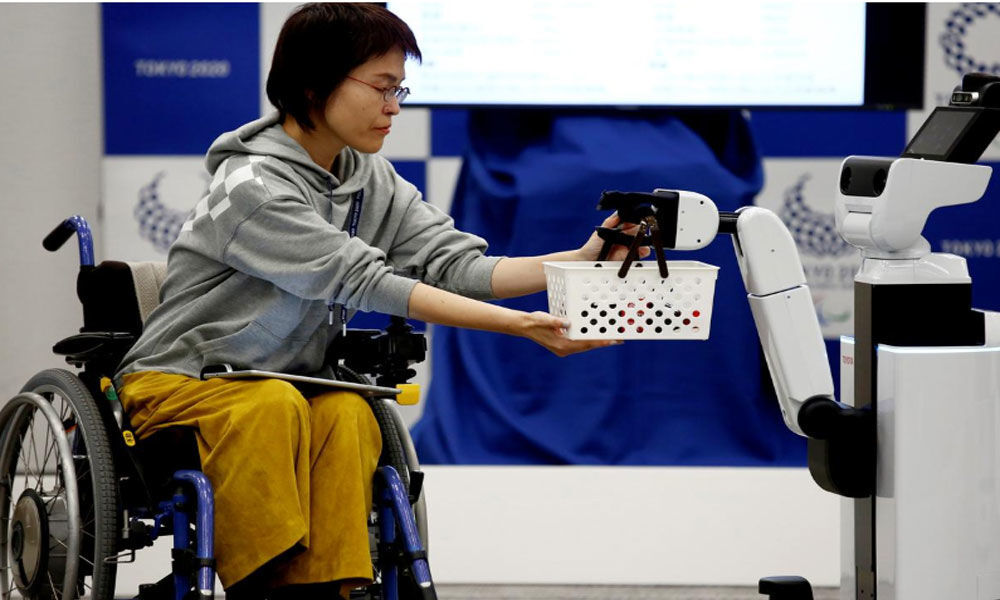 x
Toyota's Human Support Robot (HSR) delivers a basket to a woman in a wheelchair at a demonstration of Tokyo 2020 Robot Project for Tokyo 2020 Olympic Games in Tokyo, Japan, March 15, 2019. REUTERS/Kim Kyung-hoon
Highlights

Tokyo 2020 Olympics and Paralympics organisers launched their ambitious Robot Project on Friday, unveiling two of the robots designed to assist supporters, workers and athletes at the Games.

Tokyo 2020 Olympics and Paralympics organisers launched their ambitious Robot Project on Friday, unveiling two of the robots designed to assist supporters, workers and athletes at the Games.

The two products, Toyota's Human Support Robot (HSR) and the Power Assist Suit from Panasonic, were demonstrated to the public for the first time in Tokyo.

The HSR, a small white robot with built-in facial features, will assist wheelchair users at the Olympics, which begin in July 2020.

The robots can carry food and other goods, guide viewers to their seats and provide event information.

"We will support people at the Olympics and at the stadium in wheelchair accessible areas," said Minoru Yamauchi, who is in charge of Toyota's 2020 robots program.

"In terms of service, we will be offering stress-free entry and viewing and the robot can also carry bags and other luggage items for the customers."

There will be 16 HSR robots at Tokyo 2020 venues and Toyota hope to have similar products available for general sale by the early 2030s.

Panasonic also presented their offering, a battery-powered exoskeleton that assists with picking up heavy objects.

People are strapped into the Power Assist Suits, which enable users to repetitively lift and carry objects without putting a strain on their back.

They will be used by workers at Olympic and Paralympic venues, as well as the athletes' village.

Tokyo 2020 organisers have long maintained next year's summer showpiece will be the most innovative ever and more robots are expected to be announced later.

"At Pyeongchang there are examples of robots being used at the Games but I don't think it was to this sort of practical level," said Tokyo 2020 Vice Director General Maasaki Komiya.

"So, let me reiterate, we want to give the impression that robots are actually usable and they can become part of our daily lives."

"At past Games I do not believe that we really saw robots as part of the Games."

The Olympics begin on July 24, 2020 with the Paralympics commencing a month later.