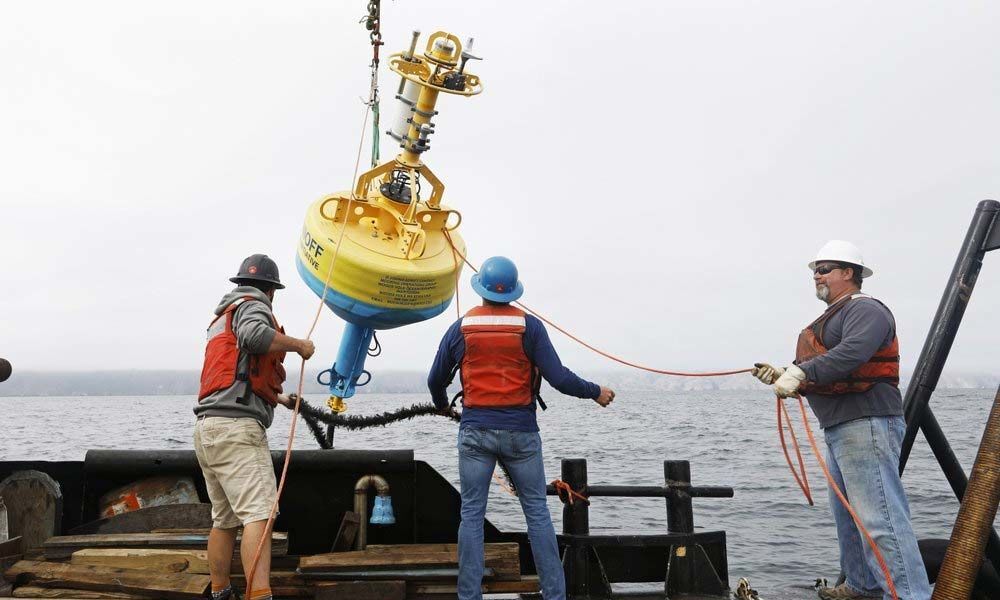 Scientists have installed an underwater sound system they hope will reduce collisions between whales and ships in the Santa Barbara Channel off Southern California.

SANTA BARBARA, Calif: Scientists have installed an underwater sound system they hope will reduce collisions between whales and ships in the Santa Barbara Channel off Southern California.

A listening station on the channel floor is able to capture whale calls as far away as 30 miles (48 kilometres), the Los Angeles Times reported Friday. That device is connected by cable to a buoy floating above that transmits data by satellite to scientists onshore.

From there, captains can be alerted to slow their ships down or reroute. It's the latest attempt to prevent ships from running into whales in the channel, where cargo vessels in and out of the ports of Los Angeles and Long Beach cross-feeding grounds of endangered blue, fin and humpback whales.

"The Santa Barbara Channel is like a buffet for a lot of whales," said Douglas McCauley, director of the Benioff Ocean Initiative at the University of California, Santa Barbara, which is sponsoring the $1.5 million project. "That hotspot happens to be right on the marine highway, kind of like the offshore version of the 101 (freeway) that connects Santa Barbara to the ports of LA/Long Beach."

In 2007, five blue whales were found dead in the channel. Efforts to reduce deaths have included shifting the ship traffic lanes and offering financial incentives to companies that follow the National Oceanic and Atmospheric Administration's request that ships slow down during whale season.

It hasn't been enough. In 2018, 11 whales in California died in ship collisions, the highest number NOAA's National Marine Fisheries Service has on record and a surge from the average 3.8 annual deaths over the previous five years. This year, at least 11 whales are known to have died, according to the Times.

Deaths often go unreported because whales typically sink when they die and are hit in remote areas. A 2017 study found that ship strikes kill more than 80 whales off the West Coast annually.

The sound system is being tested and will fully launch in early 2020.