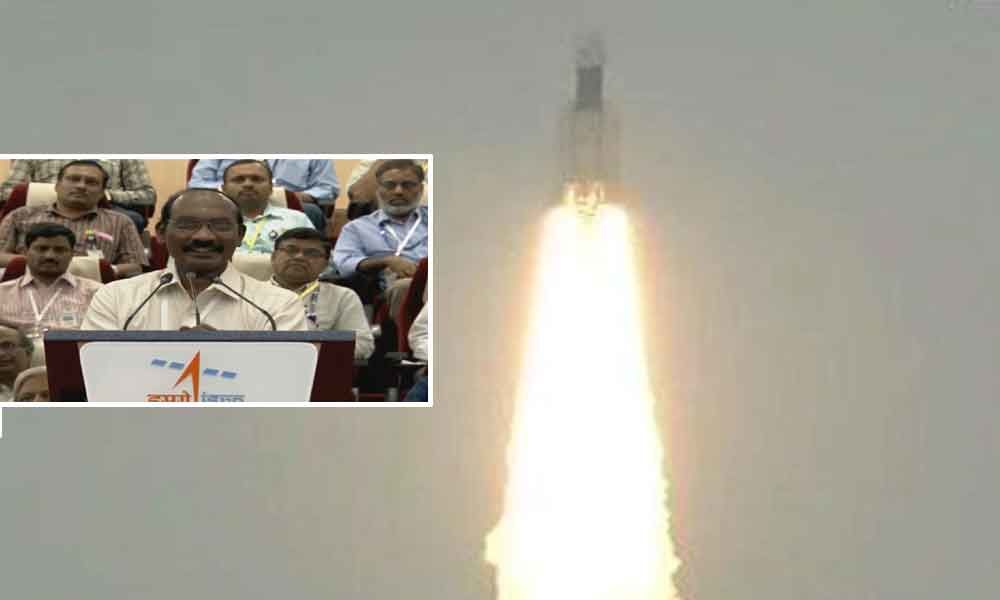 Sriharikota(AP): India's second moon mission Chandrayaan-2 aimed at landing a rover on unchartered Lunar South Pole was launched Monday with the country's most powerful geosynchronous launch vehicle successfully injecting the spacecraft in the Earth orbit after lift-off from the spaceport here Monday.

The 43.43m tall three-stage rocket GSLV-MkIII-M1 blasted off from the Satish Dhawan Space Centre here into cloudy skies at 2.43 p.m and about 16 minutes later released the 3,850 kg Chandrayaan-2 into the orbit, a week after the earlier launch was called off on July 15 following a technical snag observed during the propellant filling stage.

The injection of the Chandrayaan-2 into the Earth orbit marks the successful accomplishment of the first phase of the ambitious mission that will take about 48 days to land on the Moon surface. The launch took place at the end of a 20-hour countdown that started at 6.43 p.m Sunday after Indian Space Research Organisation scientists rectified the glitch that prompted them to call of the earlier launch.

The three-component Chandrayaan-2 comprising an orbiter, a lander and a rover will undergo 15 crucial manoeuvres before landing on the moon, expected by the first week of September, ISRO said. Billed as the most complex and prestigious mission undertaken by the ISRO since its inception, Chandrayaan-2 will make India the fourth country to soft-land a rover on the lunar surface after Russia, the United States and China.