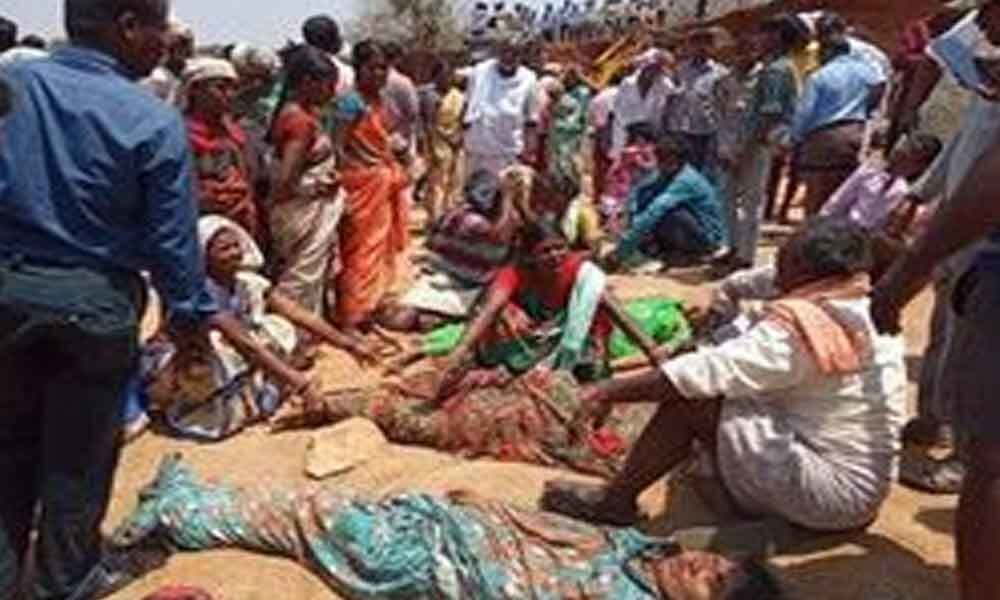 In a tragic incident, ten daily wage workers engaged Mahatma Gandhi National Rural Employment Guarantee Act (Mgnrega) were buried alive when a huge heap of mud caved in on the workers who were sitting under its shade to have their lunch.

Narayanpet: In a tragic incident, ten daily wage workers engaged Mahatma Gandhi National Rural Employment Guarantee Act (Mgnrega) were buried alive when a huge heap of mud caved in on the workers who were sitting under its shade to have their lunch. The incident occurred in Teleru village of Marikal mandal at around Wednesday afternoon.

According to eye witness, all the 12 Mgnrega workers who are all women were engaged in a digging work near a hill like area since morning. At around 12 pm, all the women workers gathered under the shade of a dug-out area to have their lunch. As they were about to begin their lunch all of a sudden the heavy heap of mud caved giving no scope for the women to escape.

All 12 twelve women workers were buried, however one among them could escape unhurt while another was severely hurt and the remaining 10 were buried alive. Those were killed on the spot include Anuradha (30), Bheemamma Pallegadda (34), Galiguttu Buddamma (36), Bodi Laxmi (32), Kummari Laxmi(33), Mangamma Marati (30), Sakali Ananthamma (42), Palle Gaddi Seenamma (55), Barella Ananthamma (60) and Cherlapally Laxmi (42).

While Cherlapally Laxmi (24) wife of Hanmanthu and Byani Manemma (35) wife of Srinivas escaped with minor injuries. "Earlier, a group of political leaders asked us to participate in the campaign. But we refused to go and told them we do not want to lose our wages by participating in their campaign.

"We went under the shade like place under the half-dug land mass to have lunch. I could sense the falling mud as we were settling. I tried to caution others. Even while we were about to notice what was going on, it all happened in seconds and all of us were buried under the mud. I could luckily escape," narrated Cherlapally Laxmi, an injured Mgnrega worker who escaped the death trap.

District Collector S Venkat Rao, Superintendent of Police Chetana of Narayanpet along with Mahbubnagar district Collector Ronald Rose reached the spot and inspected the area. Rao enquired how the incident occurred. The officials assured the workers that the government will do justice to them.

Excise and Prohibition Minister Srinivas Goud along with Narayanpet MLA S Rajender visited the spot and expressed their condolences to the kin of the bereaved families. While speaking on the occasion, Srinivas Goud said that he had already informed about the incident to the Chief Minister and assured the families of the victims that they will be provided with all necessary help from the government.

BJP MP contestant from Mahbubnagar DK Aruna, who had visited the spot, expressed shock and demanded the government to immediately announce an ex gratia of Rs 20 lakh to the kin of the deceased families. "The poor families have lost their mothers, sisters and wives. The authorities have failed to provide proper safety and other facilities for the Mgnrega workers," she said.