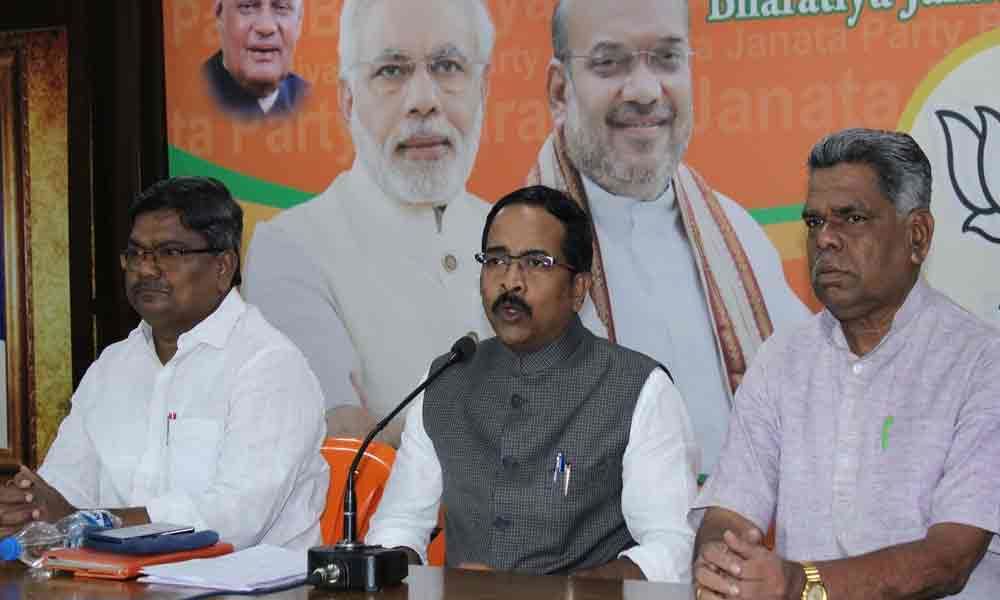 Hyderabad: Telangana BJP on Wednesday appealed to Governor ESL Narasimhan not to give approval for the promulgation of Ordinance in place of the Municipal Act since it has no public interest involved in it, but it was intended to serve the purpose of only TRS political interests.

Consequently, the Governor had returned the same to the government raising objections on the shortcomings and lapses in the Bill sent for his approval.

"We welcome the constructive, pro-people decision of the State Governor in returning the Bill and safeguarding the Constitutional spirit. We appreciate the action taken by him," he said.

However, despite the Bill was returned there is no change in the attitude of Chief Minister K Chandrashekar Rao and the government had taken the Ordinance route to secure its political interests, he pointed out.

He appealed to the Governor not to approve the Ordinance as it has no people's interest or any urgency involved. Besides, there was no Cabinet resolution giving advice to the Governor for the promulgation of the ordinance.

He said the Bill violated the 73 and 74 Constitutional amendments, trampled upon the independence of the State Election Commission, and intended to suppress the freedom of the local bodies, besides enhancing the powers of the officials.

The BJP leader also came down heavily on All India Service (AIS) officers, and wondered whether they are working as per their service rules. "How can bills with such glaring lapses and in utter violation of the Constitutional provisions are being drafted. Are these bills prepared by the AIS officials in the State Secretariat or some clerical grade people sitting in Telangana Bhavan," he questioned.

He said the party has a lot of respect towards the AIS officials and the institution. But, "the question is what are they doing when bills are coming out in gross violation of laws, Constitutional provisions? They should correct themselves. Otherwise, it will create apprehensions among people and the AIS would fall in disrepute,"

Rao said returning of the bill by the Governor for the first time in last six years is the beginning of the end of the KCR's misgovernance and TRS misrule in the State.

Instead of daydreaming to take Ordinance route, the TRS chief should think twice as to why it has happened.

Responding to a question, he said, "KCR could not take ordinance route to provide the 10 per cent EWS reservations or to fill the vacancies of the universities using the ordinance of the Centre issued in the peoples' interest. Because there was no political interest involved for him or TRS in it," he said.