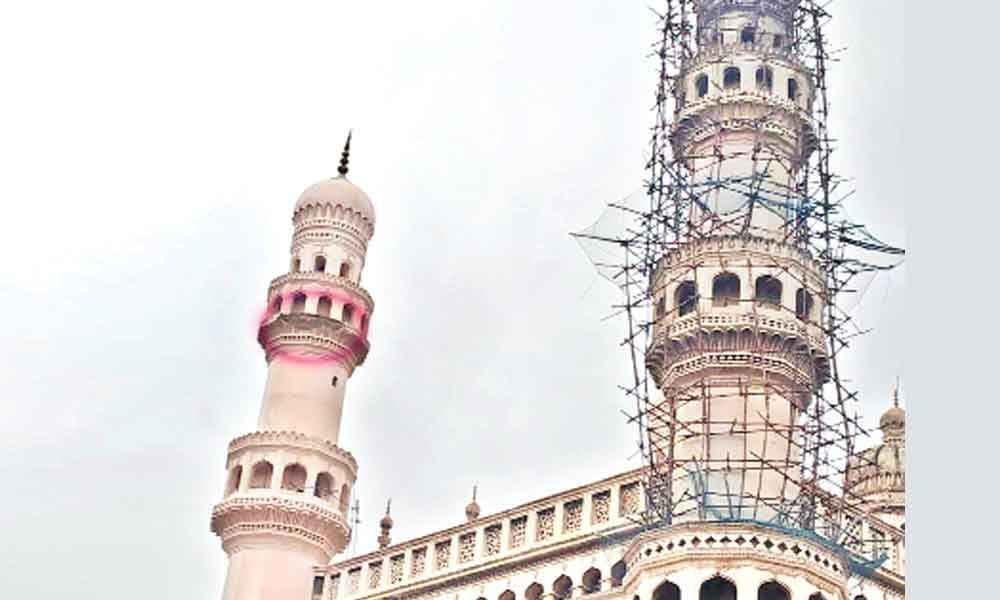 A chunk of lime plaster fell off the minaret facing the Mecca Masjid on Wednesday night.

Hyderabad: A chunk of lime plaster fell off the minaret facing the Mecca Masjid on Wednesday night.

The Archeological Survey of India, Hyderabad circle has undertaken the conservation work of the 428-year-old

Impact due to vibration caused by digging coupled with vehicular pollution takes a toll on the structure."

He further added, "A team from ASI would be visiting Hyderabad to probe into the cause of damage."

It may be noted that a large chunk of lime plaster from one of the minaret had fallen off in 2001 and in 1924 too replastering was done.

Conservation architects say that the life of lime plaster is 700-800 years but to use the same material is difficult.

It is also not easy to find artisans of that caliber.

A team from ASI Delhi is expected to probe the cause of the damage.

"Unlike modern structures there is no iron rod inserted to hold the lime plaster.

Weathering, vibration due to construction activity around the monument, the use of JCBs by the civic body and pollution could be reasons for the piece of lime stucco work falling off from the minaret."

"In August 2001, a large chunk of lime plaster had fallen off from one of the minaret.

Then it was attributed to vehicular pollution and movement of large number of vehicles around Charminar.

Unless all the departments work in unison, the iconic monument cannot be saved."