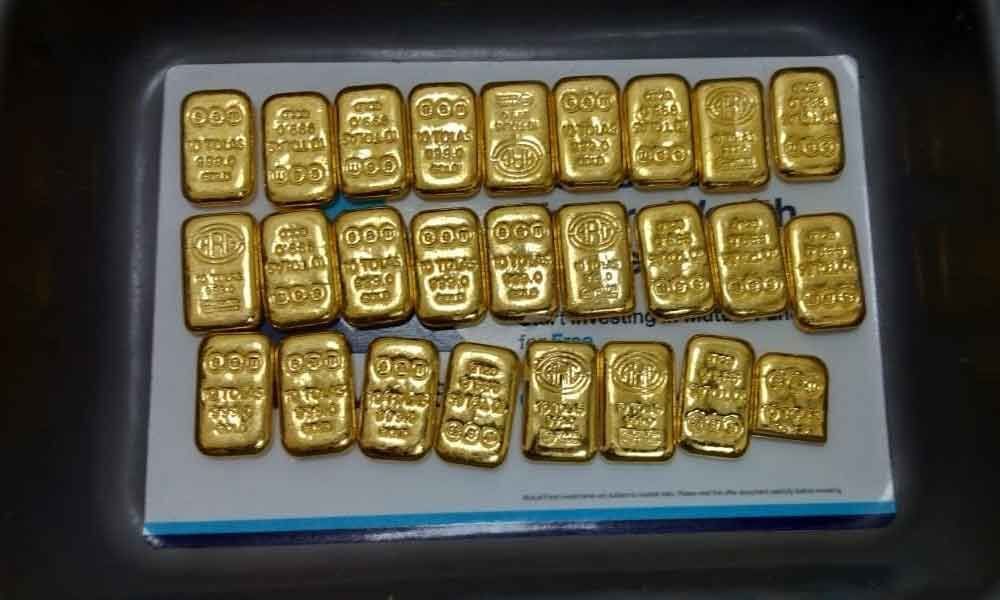 Hyderabad: The tightening of security and stringent measures being taken by the law enforcement authorities do not seem to be deterring the gold smugglers.

The sleuths of Air Intelligence Unit (AIU) of Hyderabad Customs late on Saturday night seized 26 gold bars worth Rs 1.11 crore which were being smuggled at Rajiv Gandhi International Airport at Shamshabad.

They intercepted a passenger, who arrived by flight No 6E1406 from Sharjah, UAE, and seized gold bars weighing 2,992 gram from his possession. Further investigations are on.

In June this year, 538 gram gold worth around Rs 17 lakh was seized at the airport from a passenger, who arrived from Dubai by flight No AI 952 carrying 720 gram gold paste in his rectum.

In May, Customs officials seized 1.18 kg gold at RGIA from a passenger Mohammed Feroz Khan, an Indian national, who arrived from Dubai by on an Emirates flight.

The AIU officials intercepted him over his suspicious behaviour and on enquiry found gold concealed with silver colour wire in the support frame of the trolley bag.

In another case the same month, 3 kg gold worth about Rs 90 lakh was seized from Ch Suresh, who arrived by a flight from Singapore. He concealed the gold biscuits in a specially tailored cloth that he wore as an undergarment and in his shoes.

Earlier in March this year, 800 gram gold worth around Rs 19.83 lakh was seized from two persons who concealed it in an angle drilling machine.

In another case, 219 gram smuggled gold worth about Rs 7 lakh was seized from the passenger who arrived by a flight from Dubai and was smuggling the gold in silver coated gold plates in a pressure cooker.