Healthcare to go a notch up: Minister 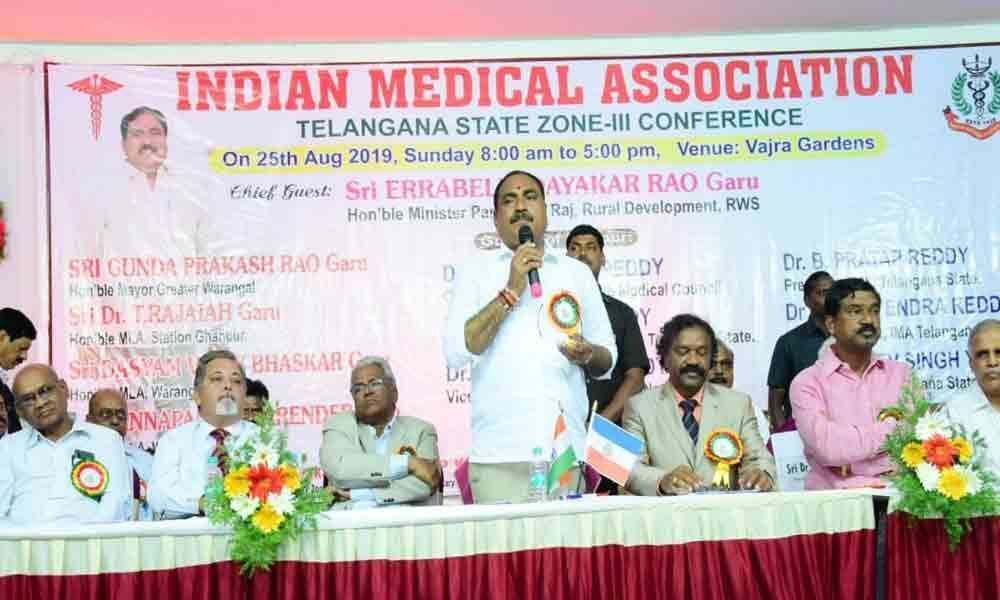 Among all medical profession is considered a noble. It is said that that doctors are second to God on this earth, Minister for Panchayat Raj Errabelli Dayakar Rao said.

Warangal: Among all medical profession is considered a noble. It is said that that doctors are second to God on this earth, Minister for Panchayat Raj Errabelli Dayakar Rao said. Speaking as the chief guest at the Indian Medical Association (IMA) zonal meeting here on Sunday, the minister said that doctors have been always compared next to God due to their healthcare services.

Equating Kakatiya Medical College (KMC) and the MGM Hospital as jewels in Warangal crown, he said that the State Government is committed to provide best healthcare services to people. "The Chief Minister K Chandrashekar Rao has special interest in developing the MGM Hospital," he said.

The Minister said that his association with the MGM Hospital dates back to 1996, claiming that he had worked for its development. He appealed to doctors to come forward to provide best of the best healthcare services to the poor and downtrodden.

The MGM Hospital can be turned into a model one if the IMA extends its support, he said. The healthcare services in the State would be upgraded to next level as the TRS Government has plans to make it happen, Dayakar Rao said. Mayor Gunda Prakash Rao, Warangal East MLA Nannapuneni Narender and Station Ghanpur MLA Thatikonda Rajaiah were among others present.