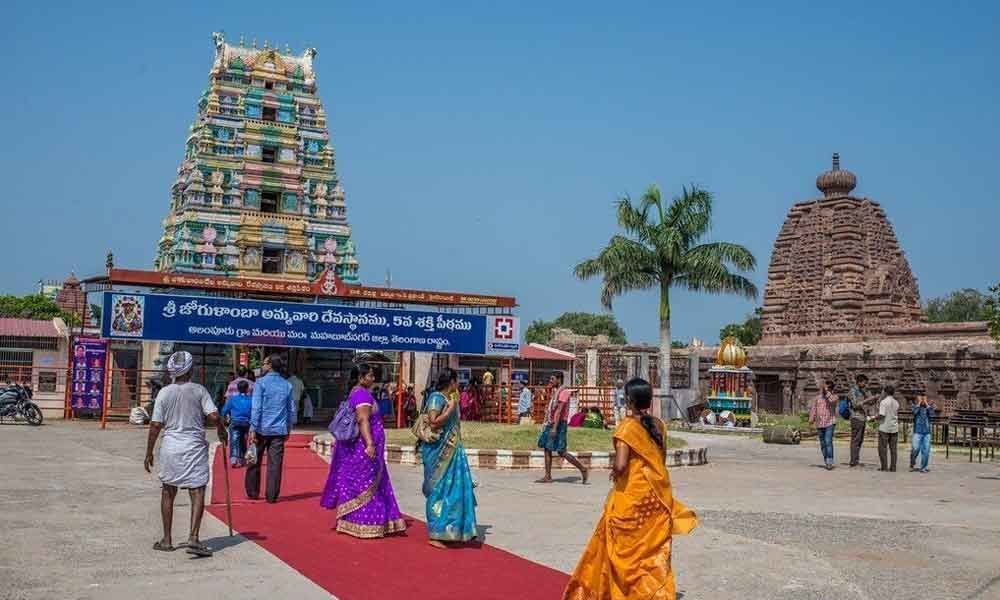 Historical Jogulamba temple in Alampur would soon become a major tourist destination with its inclusion under the PRASAD (Pilgrimage Rejuvenation Advancement Drive) scheme of the Government of India.

Hyderabad: Historical Jogulamba temple in Alampur would soon become a major tourist destination with its inclusion under the PRASAD (Pilgrimage Rejuvenation Advancement Drive) scheme of the Government of India.

The Telangana State Tourism Development Corporation has planned a series of developmental works at the temple as the state is poised to get about Rs 80 crore under the scheme.

This is the second place in Telangana which has been selected under scheme after Warangal. Jogulamba temple is located on the banks of River Tungabhadra and near its confluence with River Krishna. This temple is fifth among the 18 Shaktipeethams in the country, a marvel of Badami Chalukyan architecture and is one of the most prominent religious centres in Telangana.

According to officials in the TSTDC, development activities will be taken up through central funding. PRASAD by the ministry of Tourism was aimed at preserving and revitalising the soul and unique character of heritage sites in the country, he said.

Even after being one of the Shaktipeeth, the temple was neglected for many years. Whatever development it has undergone was during the Krishna Pushkaralu when new ghats were constructed.

Alampur is considered as the western gateway to Srisailam and it is between pilgrim route of Srisailam in Andhra Pradesh and Mantralayam in Karnataka.

The official said that the ministry had added 12 cities under the scheme in the first phase which include Amaravati, Gaya, Dwaraka, Badami, Puri, Amritsar, Ajmer, Kanchipuram, Vellankani, Warangal, Varanasi and Mathura. Jogulamba has now been added to the list, the official said.

He said that the temple would get developmental works, which would help in attracting new tourists as the place is in between Srisailam and Mantralayam.

The MD said that apart from the Jogulamba temple, the nearby temples like Maniamkonda would also have development like uphill steps-route development, rock garden, access from highway, ghat road development, landscaping and illumination.