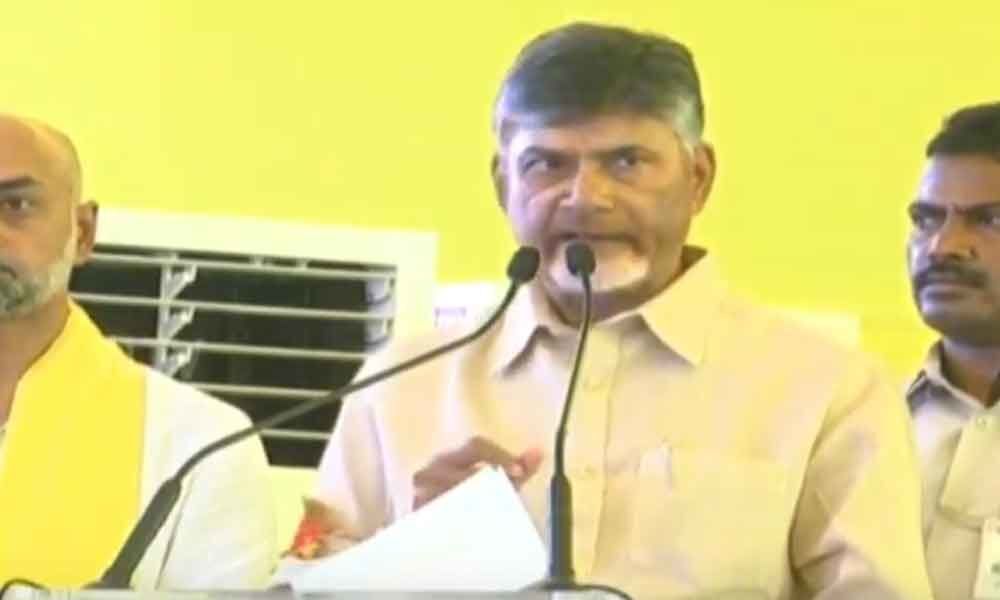 The NTR Jayanthi celebrations were conducted on a grand scale at the TDP central party office in Guntur on Tuesday.

Guntur: The NTR Jayanthi celebrations were conducted on a grand scale at the TDP central party office in Guntur on Tuesday. The TDP national president and former CM N Chandrababu Naidu and other party leaders have attended this event.

Speaking on the occasion, Chandrababu Naidu responded over the party defeat in the election results. Where the TDP supremo has given the call to the party leaders and activists to move forward with the inspiration of NTR.

He said that NTR is not a person but he's a Shakti, who left his government job and came into politics to serve the people of the state.

Speaking over the AP elections results, Chandrababu Naidu said even a great leader like NTR has faced the defeat. For which he was never downhearted.

Naidu said to the party leaders and workers that even we should also carry the same sprite of NTR and move forward.

On the occasion, Chandrababu Naidu has called NTR as a creator of the welfare schemes. He said every Telugu person should pay a great tribute to NTR. Though we had many difficulties but never neglected welfare and development activities.

Since the last four days, many TDP leaders, activists, and fans have met Chandrababu Naidu and expressed their support and assured to continue with Babu.

Chandrababu Naidu once again clarified that the TDP party is more important to me than my family and lets fight back as before.

He said lets conduct review on the election results and let's listen what the party workers have to say over the results. We will give some time to the new government and we will work as a responsible opposition party.

He said everyone should work towards the strengthening of the party. Chandrababu Naidu tried to boost the confidence in the party leaders and activists that he is there to support and take care of them.