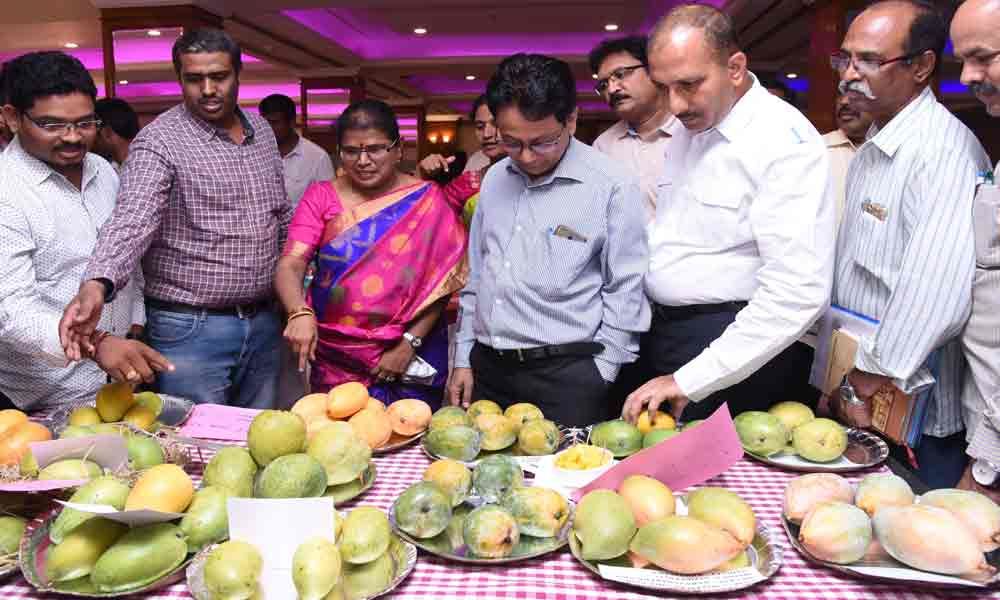 Mango farmers in Chittoor district were desperately looking for awareness to grow quality product which can be exported.

Tirupati: Mango farmers in Chittoor district were desperately looking for awareness to grow quality product which can be exported. Even though, the district has been one of the largest producers of mangoes in the State with 2.6 lakh acres of mango gardens. However, they could grow much smaller quantity of export varieties.

Benisha which occupies an important place in export varieties, accounts for less than 40 per cent while Totapuri variety is suitable mainly for pulp industry which occupies the lion share of the produce. Both mango farmers and exporters have expressed their views and problems before higher officials at a meet organised by the Horticulture department in Tirupati on Saturday at which the Chairman of APEDA (Agricultural and Processed Food Products Export Development Authority) Paban Kumar Borthakur and Commissioner of Horticulture Chiranjeevi Chaudhary, District Collector Dr N Bharat Gupta along with other officials were present.

Buyers and sellers from other districts and neighbouring States have attended the meet. While exporters have brought out their problems in exporting mangoes to other countries due to poor quality of the fruit, farmers wanted some education in taking precautions and come out with good product.

The district has number of acres to grow mango gardens and the farmers are willing to do it too. But they were unable to produce export quality varieties. In this backdrop, the APEDA and Horticulture department have decided to create awareness to farmers on which variety has to be grown, which will have export value and get remunerative prices and other things.

Awareness is also required on the process of getting APEDA certification which is essential to go for exports. Some farmers stressed the need for holding this kind of interactive sessions frequently and may be held at village-level also so that farmers can be more educated on mango growing. There was a suggestion that APEDA should conduct exhibitions in other countries so that they will be able to know the available varieties in our country while some farmers have asked for more subsidy.

As some fruits were being rejected by other countries when some fertilisers are used, there was a suggestion that government should not allow such fertilisers to enter into market and should make available only other types.

The Federation of Farmers Associations (FFA) has submitted a memorandum to officials seeking steps to increase mango exports from the district through which farmers can benefit well and government can also earn foreign exchange.

They also asked to speed up the process of setting up mango board soon and a pulp industry to be set up by either APEDA or MARKFED. FFA State Advisor GV Jayachandra Chowdary, State President M Gopal Reddy, N Nageswar Raju and others were present.