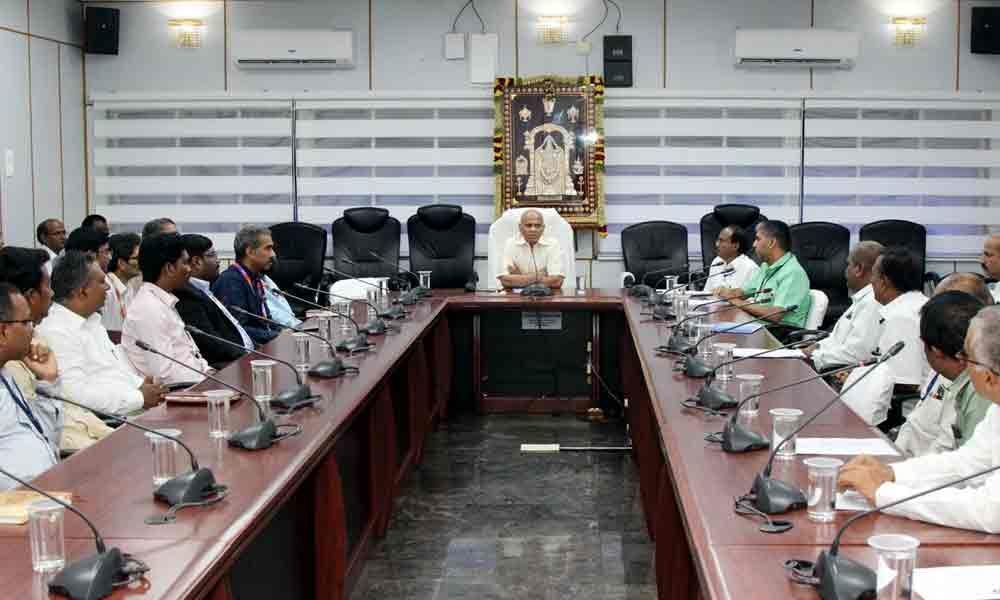 TTD special Officer, A V Dharma Reddy on Sunday reviewed with the Bankers on the issues related to Parakamani, the sorting and counting of the offerings made in the Hundi in Lord Venkateswara temple.

Tirumala: TTD special Officer, A V Dharma Reddy on Sunday reviewed with the Bankers on the issues related to Parakamani, the sorting and counting of the offerings made in the Hundi in Lord Venkateswara temple.

Explaining on the functioning of Parakamani wing, the SO placed before the bank officials some long pending issues like the stagnation of Indian coins, Foreign Coins currencies, cut notes, soiled notes etc.offered by the pilgrims in Srivari Hundi.

He said although the Federal and Andhra Banks have been doing the counting and transporting of coins on a day-to-day basis, still, there are accumulated stocks of coins and he sought other banks also to come forward to find a solution to the coins.

He also appealed to bank representatives to provide support in the task of handling the clearance of cut notes, foreign notes and coins, soiled notes, foreign cheques and current Indian coins and come out with a concrete solution after negotiating with their Bank Heads in a week's time.

Reddy exhorted the banks to extend support as a part of their Corporate Social Responsibility (CSR) agenda as the TTD was engaged in many social and welfare activities apart from its religious activities.

The SO also informed the Bank officials to enhance the remunerations of the out-sourced workers in the Laddu counters maintained by them and also asked the bank officials to ensure prompt staff attendance at the laddu counters. TTD FACAO Ravi Prasadudu, DyEo Parakamani Venkataiah, DyEO Treasury Devendra Babu participated in the meeting.