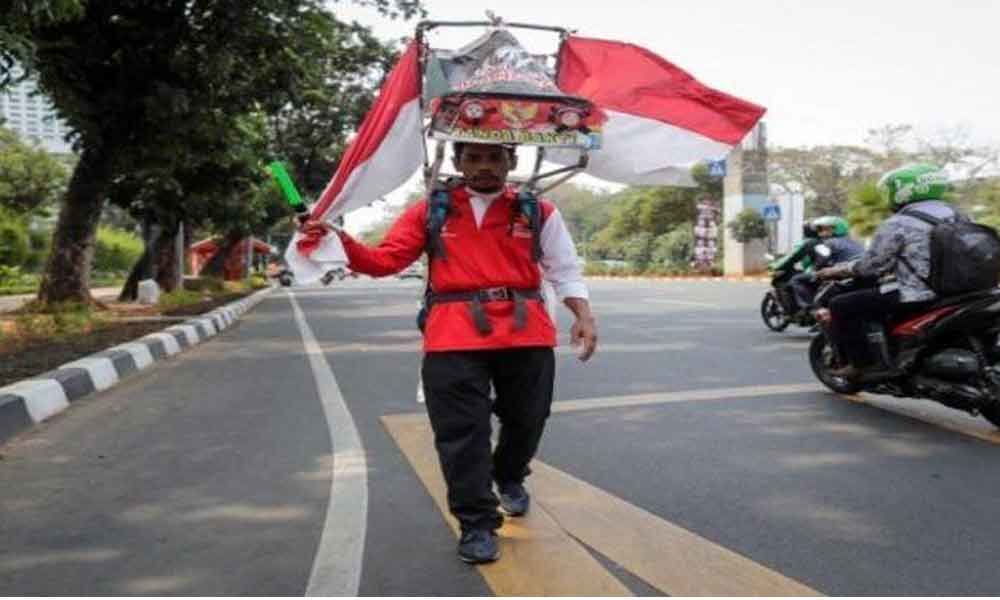 An Indonesian man on Friday completed an incredible feat of walking backwards nearly 800 kilometres from his village in eastern Java to capital Jakarta to raise awareness about deforestation and seek the government's help in saving a forest in his home province.

An Indonesian man on Friday completed an incredible feat of walking backwards nearly 800 kilometres from his village in eastern Java to capital Jakarta to raise awareness about deforestation and seek the government's help in saving a forest in his home province.

Surrounded by curious onlookers and members of the volunteer group Indonesian Escorting Ambulance, which has helped him during parts of his journey, 43-year-old Medi Bastoni -- a father of four -- appeared indefatigable and happy with the attention he received after completing the arduous walk that took him about a month.

Bastoni told Efe news that he was in Jakarta to urge the government to pledge for reforestation, which has not generated enough interest, adding that he hoped people would be motivated to participate in the drive after his journey.

He walked the last few kilometres on Friday before meeting Sports and Youth Minister Imam Nahrawi, who was waiting for him after receiving his appeal seeking help in the reforestation of the forest on Mount Wills, situated in the East Java province.

In a small ceremony outside the Ministry, Nahrawi handed Bastoni a pot with a sapling which the activist will take back to his village, calling it a symbol for the reforestation in Wills, an area near his village which is currently undergoing a reforestation programme after suffering fires and illegal felling.

According to Bastoni, deforestation has led to water shortages and affected the livelihoods of many residents dependent on agriculture and livestock farming.

Bastoni set off from his village Dono on July 18 with a backpack which weighed eight kg and a sum of 300,00 rupiahs ($21). Supported by his family and friends, he walked backwards on roads and highways for a staggering 780 km, according to his own estimates.

The activist crossed four provinces and innumerable towns on the way, helped by a headpiece he had built with plastic pipes and fixed with a rear-view mirror which allowed him to move in reverse through busy highways and continuous traffic.

Bastoni was helped every day by people he met on the way, who offered him food, took photos with him and allowed him to sleep in mosques, police stations and houses, while he documented his experience on social media.

Fatigue and swelling in the legs forced the activist to rest for many days and he gave up his goal of reaching the capital before August 17, the Indonesian Independence Day, when President Joko Widodo meets citizens.

However, Bastoni has not given up hope of meeting the President personally to enlist his support for the reforestation programme in Wills.