Is a strong dictator better than a weak democrat? 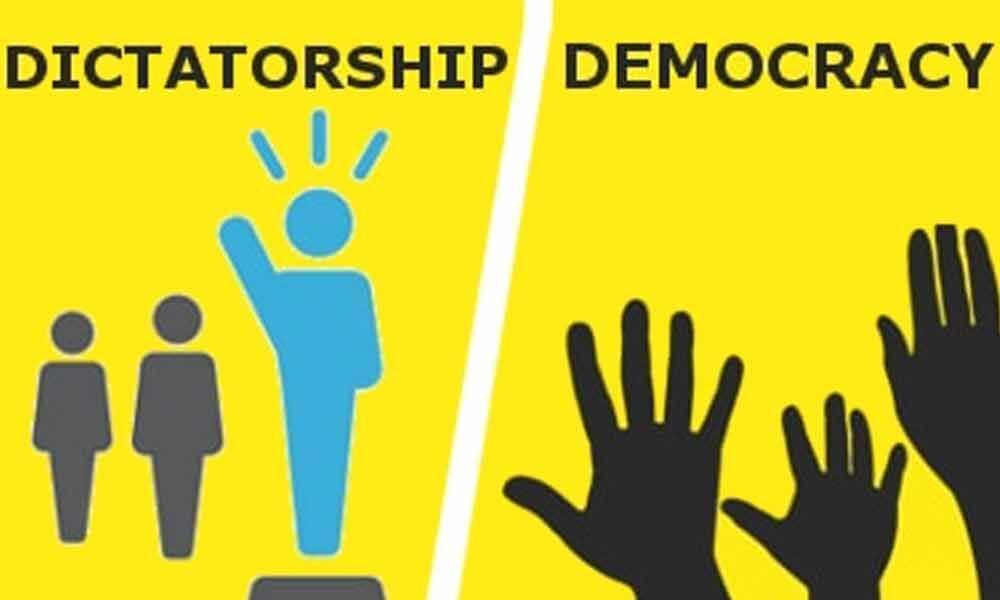 Prime Minister Modi is being keenly observed nowadays by aĺl citizens of our country with regard to his imperious rhetoric bereft of dignity and...

Prime Minister Modi is being keenly observed nowadays by aĺl citizens of our country with regard to his imperious rhetoric bereft of dignity and decency expected from a PM which reflects his desperation to occupy headlines of newspapers with a shrewd plan of neutralizing the effect of Rahul Gandhi especially in the immediate aftermath of NYAY of Congress party that promises minimum annual income of Rs.72000 to the bottom quintile among poor.(Selective amnesia of Indian politicians - THI, March 30).

The author is correct in finding fault with Modi for stooping down to that level in his language where he hurls jibes against the son of a CM in a cheap manner .

Curiously Modi, in the surcharged climate of elections, is unnerved by his diminishing popularity which is why he appears to be hell bent to go to any extent by flouting all norms and precedents to give undue credit to him and to his party even by trying to appropriate the good work done by soldiers and scientists.

Verily, there is no BJP built by Vajpayee and Advani in India now and it is all power, might , arrogance and one-upmanship of a behemoth like Modi. He and his acolyte Amit Shaw are crushing the dissenting voices in the country brutally.

A redoubtable and venerable leader like Advani has been politically discarded by this duo in the most ignominious way by denying him ticket to contest Parliament elections.

Another stalwart Murali Manohar Joshi met the same fate in the hands of the same duo. The hagiography of Modi is flying high both in Party and in government alike.

Interestingly, Modi government has spent a whopping amount of Rs.5000 crore during his first four years of rule on advertisements to promote his image and achievements. Never has it happened in India where the photograph of PM is ubiquitous even in petrol outlets and railway tickets.

The prediction of one prominent leader of BJP is that there will be no further elections in India if Modi becomes PM again after 2019 elections and this may become a reality also given the tyrannical functioning of Modi where he mercilessly crushes any voice against him.

However, the biggest advantage to Modi is the disunity among political parties opposed to BJP rather than progress card of Modi for the last five years. The Himalayan egos of opposition leaders precluded the possibility of non BJP parties coming under one umbrella to take the bull like Modi by horns.

Sharad Pawar's statement that BJP may emerge as the largest single party after elections amounts to admitting the defeat before war is fought.

Mamata Banerjee nurtures the hopes of becoming next Prime minister but her act of not allowing the theatres in West Bengal to screen the film, cleared by Censor Board, "Bhobishyoter Bhoot " projects her being intolerant to criticism like Modi. Ergo, the electoral prospects are not rosy for opposition parties.

No doubt, Modi would not let democracy survive in the country, if he wields power once again as PM. If it happens, the culprits are the opposition parties who have utterly failed to wage a united fight against Modi at least for the sake of democracy in the country.

At the same time, they flounder to assess the strength they have to gather to check the Modi Juggernaut.

Perhaps, people of this country may think that a strong dictator is better than a weak Democrat and may well vote for BJP. At the moment, we are left with no option except waiting up to May 23 to know which leader is smiling and which leader is wailing on that day.