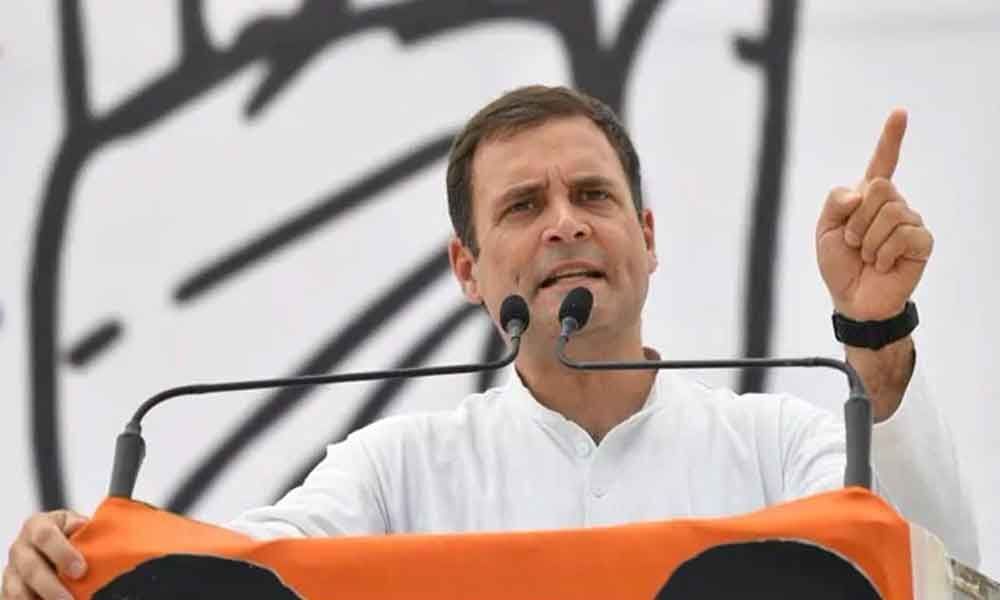 Elections 2019: Congress chief Rahul Gandhi said that the Congress's 'Nyay' scheme has given a big jolt to Prime Minister Narendra Modi. He claimed that PM Modi "will lose the elections"

BHUJ, GUJARAT: Congress president Rahul Gandhi claimed on Thursday that there is an undercurrent in favour of the Congress and Narendra Modi who has "failed" as prime minister will lose the 2019 general elections.

Rahul Gandhi said that the Congress's 'Nyay' scheme has given a big jolt to Prime Minister Modi.

"There is an undercurrent in favour of the Congress party. I am touring all over the country and atmosphere is good for us," he told reporters after addressing an election rally in Bhuj, Gujarat.

Mr Gandhi went on to claim that PM Modi is going to lose the 2019 general elections as he is a "failed" prime minster. The Congress leader reiterated his charge of corruption in the Rafale deal.

"The real issues this elections are unemployment, suffering of farmers and corruption. In the Rafale deal," he said, adding his allegation that "Prime Minister has given a free gift of Rs. 30,000 crore to Anil Ambani."

"Now, it has been published in the newspapers of France that they were given tax benefits in that country. Unemployment is at a 45-year high," he further alleged.

"So, he is a failed prime minister and he is losing this election," Mr Gandhi claimed.

"Our Nyay scheme, in which we will transfer Rs. 72,000 per year to poor families, has given a big jolt to Narendra Modi," he said.

The Bihar BJP leader has filed the case in a court in Patna against Rahul Gandhi for his reported "defamatory" statement that "all thieves have Modi in their surnames".

Rahul Gandhi expressed confidence that his party will gain a major success in the 2019 Lok Sabha elections.

The Congress chief addressed two rallies in Gujarat on Thursday - one at Vanthli in Junagadh district and the other at Bhuj in Kutch district.

Today, Rahul Gandhi is scheduled to address a rally in Bardoli district.

All 26 Lok Sabha seats in Gujarat will have a single phase polling on April 23. Results will be declared on May 23.