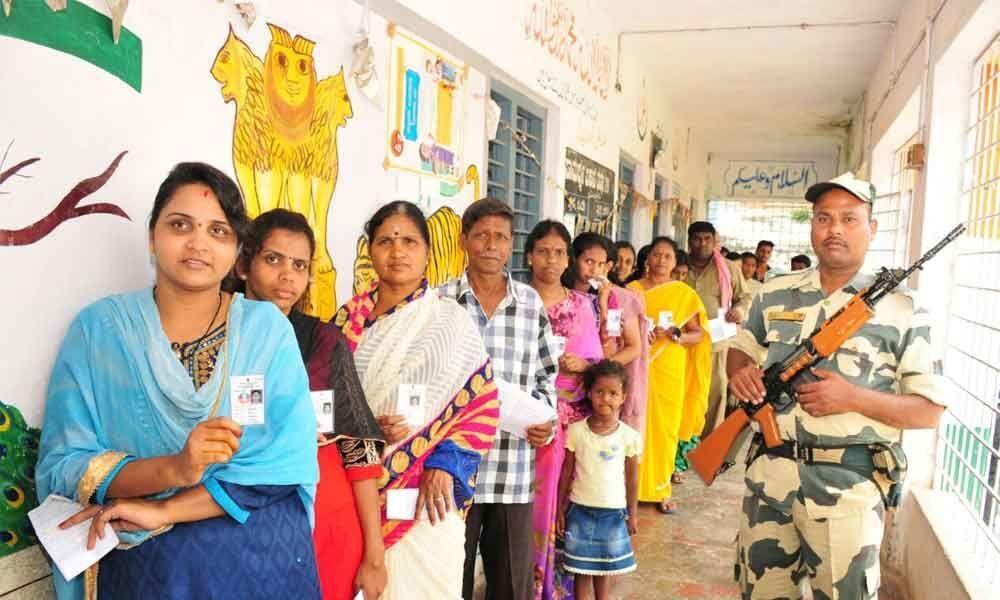 Moderate voting was recorded in the first two hours of polling in the 14 Lok Sabha constituencies across Karnataka's central and southern regions, an election official said on Thursday.

Bengaluru, April 18: Moderate voting was recorded in the first two hours of polling in the 14 Lok Sabha constituencies across Karnataka's central and southern regions, an election official said on Thursday.

"Polling has been moderate in the first two hours from 7 to 9 a.m., with 10 per cent voting in the first hour in most of the parliamentary seats," the state's Joint Chief Electoral Officer A.V. Surya Sen told IANS.

Although polling began on a slow note in the rural areas, it was brisk in cities and towns with hundreds of voters queuing up at the booths to exercise their franchise.

"The response has been good so far as voting picked up in the first hour and gained momentum as more voters turned up at the booths to cast their ballot," said Sen.

Admitting that there were complaints of glitches in the Electronic Voting Machines (EVMs) in some booths, Sen said they were replaced soon to ensure no delay in voting.

"We have given extra EVMS to all the polling booths to replace any machine having glitches or malfunctioning. Technical officials have been stationed at the booths to replace them at the earliest to avoid voters waiting for their turn," added Sen.

Of the 2.67-crore electorate in the first phase, 1.35-crore male and 1.32-crore female voters will decide the fate of 241 candidates, including 15 women and 133 Independents.

In all, 52,112 Electronic Voting Machines (EVMs) are in use with 36,196 controlling units and 37,705 Voter Verifiable Paper Audit (VVPATs) that allows voters to verify that their vote is cast correctly.

"Over 1.54-lakh personnel are on duty in all the polling stations across the 14 seats with 38,597 police personnel providing security to ensure free and fair polling," another poll official told IANS earlier.

Of the total booths, 16 per cent or 4,826 of them are considered critical in Bangalore Rural, Hassan, Mandya and Tumkur.

Among the constituencies, Bangalore North has the highest number of 31 candidates, followed by 25 in Bangalore South and 22 each in Bangalore Central, Mandya and Mysore.

Lowest number of candidates is six in Hassan, followed by 10 in Chamarajnagar, 12 in Udupi-Chikmagalur and 13 in Dakshina Kannada.

Key constituencies in the first phase are all the three seats in Bangalore, Mandya, Hassan and Tumkur.

Unlike in the past elections, the main parties - Bharatiya Janata Party (BJP) and Congress are locked in straight contests this time, as the latter has entered into a pre-poll tie-up with the ruling Janata Dal-Secular (JD-S) to field joint candidates as part of their seat-sharing arrangements.

The BJP is contesting in 13 seats and supporting multi-lingual South Indian actress Sumalatha Ambareesh contesting as an Independent in the high-profile Mandya seat where JD-S has nominated Nikhil Gowda.

Nikhil, an upcoming Kannada film star, is the son of state chief minister H.D. Kumaraswamy and grandson of JD-S supremo H.D. Deve Gowda, who shifted to contest from Tumkur, paving way for his other grandson Prajwal Gowda from Hassan, a bastion of the powerful dynastic Gowda clan.

In India's tech hub, BJP and Congress are again locked in straight contests.

The BJP's outgoing member Union Minister D.V. Sadananada Gowda is re-contesting from Bangalore North for the second time, while its two-time sitting member P.C. Mohan is trying for a hat-trick from the prestigious Bangalore Central.

The Congress has fielded Krishna Byre Gowda against Sadananada Gowda in the Bangalore North, where the politically dominant Vokkaliga community are present in large numbers.

In Bangalore South, the BJP has fielded Tejasvi Surya, in place of former Union Minister A.H. Ananth Kumar, who died last November. Kumar represented the seat for a record six times since 1996.

Surya, a 28-year-old lawyer in the Karnataka High Court and also a member of the RSS, is pitted against B.K. Hariprasad, a Congress Rajya Sabha member.

Former Congress ministers in the UPA government - M. Veerappa Moily and K.H. Muniyappa are in the fray from Chikkaballapur and Kolar.

BJP's Nalin Kumar Kateel and Pratap Simha are re-contesting from Dakshina Kannada and Mysore to retain the seats for the third and second time.

Polling in the remaining 14 parliamentary seats in the western and northern regions of the state will be held on April 23. Vote count will be on May 23.