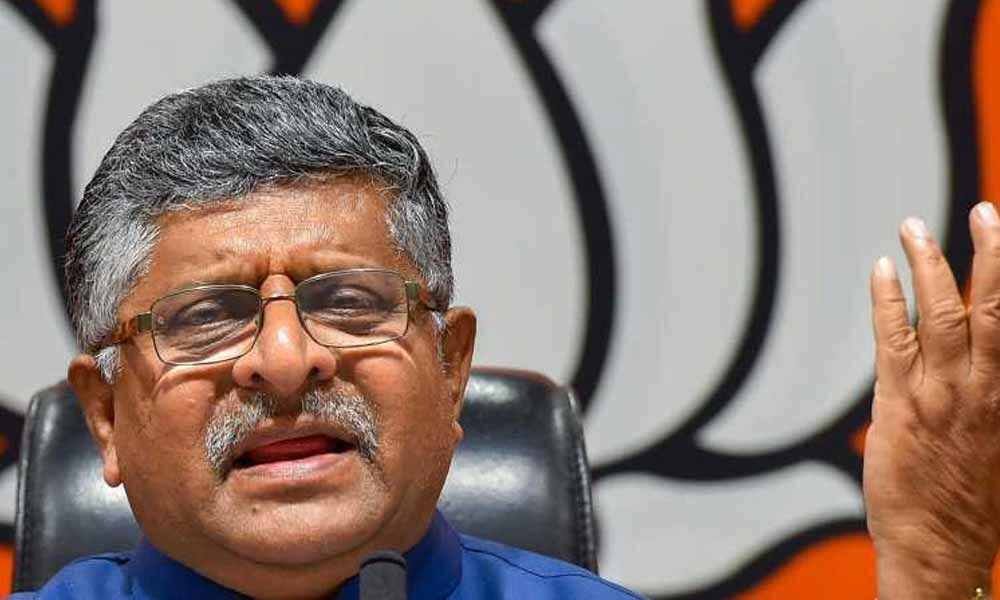 He also pitched for one nation one poll and urged the Opposition to consider the proposal with an open mind.

"If people of this country elect Narendra Modi, then EVM is faulty. What is this logic?" he asked the opposition members while replying to the debate on electoral reforms.

"This hypocracy and double standards impinge upon the polity of the country," Prasad added.

He also pitched for one nation one poll and urged the Opposition to consider the proposal with an open mind.

The minister said the government will write to the Election Commission to have a single voter list for assembly, panchayat and general elections in the country.

Prasad said that the government has taken various measures to improve the electoral funding system and that it was ready to consider any other suggestions.

"Time has come for one nation one poll.

We should consider this proposal with an open mind," he said and hoped that some conclusion could be achieved after discussion.

On aspersions related to EVMs and demand for returning to ballot papers, the minister said that post-1999, as many as 4 general elections and 122 assembly elections have been held using EVMs.

He said Manmohan Singh became the prime minister twice based on elections held with EVMs.

He asserted not a single complaint has been received regarding vote being cast to a particular candidate through the EVM and it gets transferred to some other candidate.

On opposition charge of crediting itself with achievements of defence forces during the election campaign, the minister said: " Why national security should not become a plank for election discourse?" Regarding allegations of managing media and social media, Prasad said: "Stop insulting the voters of this country and try to acknowledge your defeat."

The minister said the government would not allow the misuse of data by foreign powers and said legislation in this regard has been in the works.

He also highlighted that BJP-led NDA has returned to power on various schemes and programmes for the welfare of the poor.

On electoral funding, Prasad said the government has taken many steps in the past three years to improve the system and the corporates have been asked to give donation only through cheques.

"But we need to further plug the gaps where funding part is concerned," he added.

Earlier, participating in the debate, Derek O'Brien (AITC) said the time has come to form laws for electoral reforms in the country while pointing out to various issues like "misuse" of data by political parties in the elections.

He said Parliament should also look at the process to appoint election commissioners.

"Parliament is above Election Commission either we amend the constitution we will have to see how election commissioners are elected," O'Brien said.

He called for the usage of ballot papers during the election process. Bhupender Yadav (BJP) said the time has come to hold Parliament and assembly elections simultaneously and urged members of all parties to consider it.

He said Electronic Voting Machines (EVMs) should be strengthened and there should be no negativity about it.

Yadav said the electoral bond should be taken forward to end the influence of money in election process. He suggested there should be one electoral roll.

He alleged that the Election Commission did not take any action for violation of its advisory related to naming defence forces for wooing voters during the election campaign.

Sibal quoted a report by private agency that suggested a huge amount being spent during the last election, of which 45 per cent was made by the ruling party.

Continuing his attack, Sibal sought to know from where this fund came and whether it was black money or white.

Sibal charged that several amendments were made in finance Act and FCRA in the last 2-3 years to facilitate donations during the general poll. He alleged that donations were given by those corporates which were favoured.

The Law Minister said Sibal had appeared on behalf of the Congress in a case related to FCRA.

However, Sibal refuted the charge and mentioned a few case numbers where he had not appeared before the court. Opposition members sought an apology.

Later, Bhupender Yadav reiterated the charge and placed some document on the table of the House, which was also objected by many opposition members.

Continuing its attack, Sibal said social media was misused and the BJP on its part enjoyed complete media hegemony.

He alleged that print and election media gave maximum coverage to BJP party. Sibal also said that BJP might have won the election, but constitutional provisions were violated.

He talked about the criminalisation of politics and said that the EVMs has become counting machines.

Ram Gopal Yadav of SP demanded that "we should go back to ballot paper" as people do not have faith on EVMs. He sought one voter list for panchayat, assembly and general elections. Yadav said the government, at the central or state level, should resign six months before elections.

Speaking on the suggestion of simultaneous state and Lok Sabha elections, Ramdas Athawale of the RPI (A) said all political parties including the Congress must come out in its support to save time and electoral expenses.

BJP's Vinay P Sahasrabuddhe said the recent electoral verdict has established that people of the country believe in EVMs.

He urged political parties to have an open mind with regard to the idea of simultaneous Lok Sabha and state polls.

T K Rangarajan of the CPI M said the election commission must be replaced by a collegium under the sanction of the President of India.

Endorsing it, D Raja of the CPI said we should agree for a collegium to choose and appoint election commissioners.

Satish Chandra Misra of the BSP said his party opposes use of EVMs to conduct elections as they can be manipulated.

V Vijayasai Reddy of the YSRCP made suggestions to reform the electoral process.

NCP's Majeed Memon said advanced countries such as the US, England, France and Germany have banned EVMs and it was for India to examine why they have banned its use.

Echoing similar views, Sanjay Singh of the Aam Aadmi Party observed that if developed nations are using ballot papers, what is the problem in using it here to conduct polls.