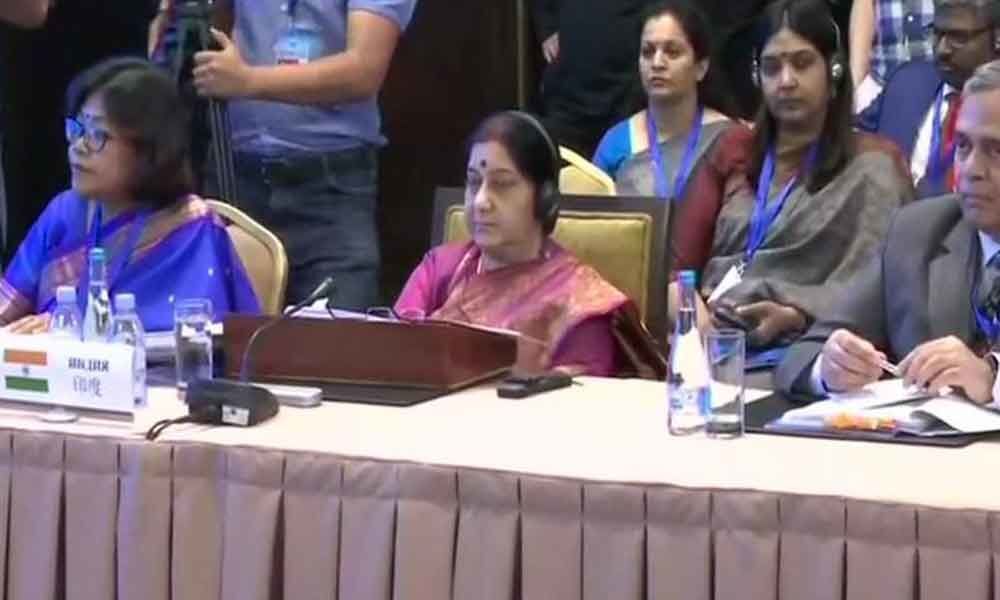 SCO was founded at a summit in Shanghai in 2001 by the presidents of Russia, China, Kyrgyz Republic, Kazakhstan, Tajikistan and Uzbekistan.

New Delhi/Bishkek: India on Wednesday said the ghastly bombings in Sri Lanka at a time when the wounds of the Pulwama terror attack were still raw in people's mind has made it more determined to resolutely fight against the menace.

Addressing the meeting of Shanghai Cooperation Organisation Council of Foreign Ministers here in the Kyrgyz capital, External Affairs Minister Sushma Swaraj said India is determined to consistently strengthen cooperation within the SCO framework for comprehensive, cooperative and sustainable security. "Our heart goes out to our brothers and sisters of Sri Lanka, who have recently witnessed the ghastly act of terrorism. Our wounds of Pulwama attack were still raw and the news from the neighborhood has made us more determined to resolutely fight against this menace," Swaraj said at the meeting, also attended by Pakistan Foreign Minister Shah Mehmood Qureshi.

Nine suicide bombers carried out a series of devastating blasts that tore through three churches and as many luxury hotels on April 21, killing more than 250 people and injuring 500 others. The ISIS terror group claimed the attacks, but the government blamed the local Islamist extremist group National Thawheed Jammath (NTJ) for the Ester Sunday bombings.

The attack came months after India witnessed a suicide attack by Pakistan-based Jaish-e-Mohammed on CRPF personnel in Pulwama district of Jammu and Kashmir, killing 40 soldiers.

Swaraj said India is open to ideas on how we can make the work of Regional Anti-Terrorism Structure (RATS), which specifically deals with issues relating to security and defence, more effective.

She said that India is committed to continue working for a favourable environment for the SCO member countries' economic activities and to intensify work on the relevant SCO documents dealing with economic and trade cooperation.

"India subscribes to a rule-based, transparent, non-discriminatory, open and inclusive multilateral trading system, centered around the World Trade Organisation, and firmly oppose unilateralism and protectionism," she said, amidst the trade war between China and the US.

India was an observer at the SCO since 2005 and has generally participated in the ministerial-level meetings of the grouping which focus mainly on security and economic cooperation in the Eurasian region. Along with India, Pakistan was also granted the SCO membership in 2017.

The SCO was founded at a summit in Shanghai in 2001 by the presidents of Russia, China, Kyrgyz Republic, Kazakhstan, Tajikistan and Uzbekistan.