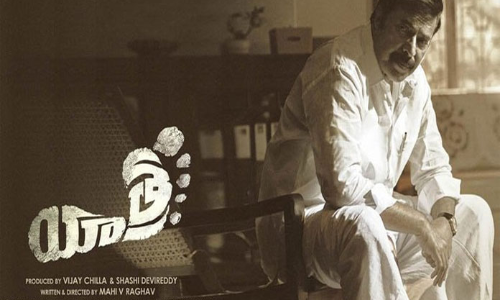 Yatra Movie Review and Rating After a long time, Malayalam Megastar Mammootty is all set to greet the Tollywood audience with Yatra movie which is the biopic on beloved leader Dr Y S Rajasekhara Reddy

After a long time, Malayalam Megastar Mammootty is all set to greet the Tollywood audience with 'Yatra' movie which is the biopic on beloved leader Dr. YS Rajasekhara Reddy. Mahi V Raghav of 'Anando Brahma' fame directed this project. Vijay Chilla and Shashi Devireddy under 70 MM Entertainments banner bankrolled this project. Ever since the biopic was announced, the expectations have been high in this movie. Even the teaser and trailer of the movie has greatly impressed the audience today. The movie has finally made it in the theatres today. Let's check out the review of the film:

Story:
The film depicts the journey of YS Rajasekhar Reddy's Padayatra that took place in 2003. When a lot of people are planning to be the CM from the party, YSR undertakes a Padayatra to meet the people of the state. How did he accomplish it successfully? How did he put a check to the opponents? How did he gain support from the people? Forms the story of the movie.

'Yatra' is undoubtedly a one-man show by Mammootty. His amazing performance as YSR makes the audience stick to the chairs throughout the end. Mammootty has gone under the skin of the character and delivered an immersive performance. Jagapathi Babu's remarkable performance is an eye feast to watch. Suhasini delivered a spectacular performance. She is perfect for her role. Ashrita Vemuganti wonderfully portrayed her character. Rao Ramesh's phenomenal performance adds more strength to the film. Anasuya Bharadwaj delivered a remarkable performance and had justified her character. Posani Krishna Murali is too good for his role. Sachin Khedekar performed extraordinarily well. The rest of the cast also made their presence felt.

The production values by 70 Mm Entertainment banner are luxurious. We can say that the producers haven't compromised on the quality of the film and invested a decent amount in the film. K has given some pleasant tunes which elevated the emotional scenes well. His BGM is also really good. Cinematography by Sathyan Sooryan is appreciable. He has produced sleek visuals for the film. His camera angles are perfect. Editing by A Sreekar Prasad is clean.

Director Mahi V Raghav will impress the audience with his storytelling skills yet again. The way he narrated the story is not too fast and not too slow. Though he concentrated more on the Padayatra of YSR, he also tried to throw light on some crucial events in YSR's life. Yatra is one of its kind biopics. The film is undoubtedly a different one from the rest of the projects. Unlike the ups and downs, the film will project a phase in the life of YS Rajasekhar Reddy that was most loved by the people. From the beginning, the makers were clear about planning their content into the public and had achieved in showcasing the same in the theatres. Much to the doubts and dual thoughts, Mammootty playing YSR’s role added a lot of weight to the movie. The clarity in direction helped the film go well with the audiences. The film cannot be compared with other biopics as the director took an unconventional path in trying to showcase the life of a people's leader in an entirely new dimension. Filmmaking wise and story-telling wise, the entire team expressed their full form. On the whole, the movie lives up to the expectations and will surely make YSR fans proud.