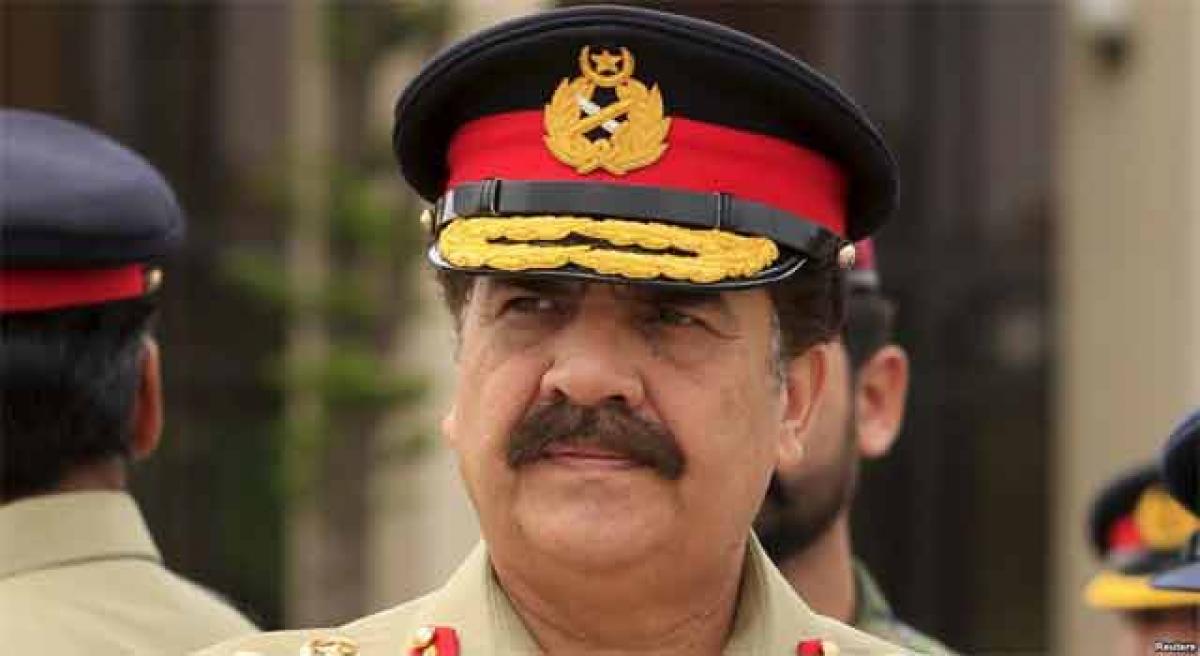 An interesting questionnaire appears on screen when you browse some Pakistani newspapers online. This one is about the country-'s Army Chief, General...

An interesting questionnaire appears on screen when you browse some Pakistani newspapers online. This one is about the country's Army Chief, General Raheel Sharif. There are some 10 questions in the quiz that promote General's knowledge (wait, I did not mean the General's knowledge. It is knowledge about the General). The why, where, who and when of the General is graded up to 10 and in my first attempt I scored 6 sometime back.

The goings-on for Nawaz Sharif don't seem to be smooth of late though his Cabinet is reportedly confident of completing its full term. Caught in the mire of Panama papers, the Nawaz Sharif government is on an overdrive to get the names of his family members cleared from the mess. Trouble has been brewing for Sharif for some time now. On the face of it, the equation between the Army and the government looks stable. General Raheel Sharif has given a call for fight against corruption

Not bad, compared to several other Pakistanis attempting it with much less success. Yes I do keep track of the itsy bitsy of Pakistan's Generals,' as it matters a lot in understanding not only what could be in store for the country but also to India, its neighbour, and in understanding the region’s dynamics. I don't belittle the democracy in Pakistan which is as good or as bad as it is in our country. In fact, it is facing many more hardships than we do in keeping it safe.

However, the emerging signs from Pakistan, of late, signal peril to its democracy once again. On the one hand, the country is engaged in its own war on terrorism, however, selective it may be while on the other, it continues to be burdened with corruption-related issues.

The goings-on for Nawaz Sharif don't seem to be smooth of late though his Cabinet is reportedly confident of completing its full term. Caught in the mire of Panama papers, the Nawaz Sharif government is on an overdrive to get the names of his family members cleared from the mess. Trouble has been brewing for Sharif for some time now. On the face of it, the equation between the Army and the government looks stable.

The Panama fallout has been making waves in the country of late with the leaks linking Nawaz Sharif's family members to the investments thereof. In the backdrop of the same, the sacking of 12 serving Army officers on graft charges by Raheel should come as a warning bell to the Prime Minister.

This may not be an indication of Raheel Sharif's political motives as yet, but the move could not be dismissed as insignificant or routine for the simple fact that it is not. There is a growing demand in Pakistan for an inquiry into the offshore assets of Prime Minister Nawaz Sharif's children as revealed by the Panama papers.

The data from the Panama Papers, available on the website of the International Consortium of Investigative Journalists — one of around 100 news organisations and 300 journalists that worked on mining the data simultaneously — reveals the offshore holdings of members of Prime Minister Sharif’s family.

The documents available on the ICIJ website say that the PM’s children Mariam, Hasan and Hussain “were owners or had the right to authorize transactions for several companies.” Mariam is described as “the owner of British Virgin Islands-based firms Nielsen Enterprises Limited and Nescoll Limited, incorporated in 1994 and 1993”.

On one of the documents released by ICIJ, the address listed for Nielsen Enterprises is Saroor Palace in Jeddah, Saudi Arabia. The document, dated June 2012, describes Mariam Safdar as the ‘beneficial owner.’ According to ICIJ, “Hussain and Mariam signed a document dated June 2007 that was part of a series of transactions in which Deutsche Bank Geneva lent up to $13.8 million to Nescoll, Nielsen and another company, with their London properties as collateral.”

Hasan Nawaz Sharif is described as “the sole director of Hangon Property Holdings Limited incorporated in the British Virgin Islands in February 2007, which acquired Liberia-based firm Cascon Holdings Establishment Limited for about $11.2 million in August 2007.”
Despite the pronouncements of Nawaz Sharif on his and his family's integrity, it is said that people's disillusionment is only growing with his governance. More so after General Raheel Sharif had earlier given a call for fight against corruption.

Speaking to officers and soldiers recently in Kohat, the Army Chief pointed out that corruption was the real issue that was “failing the country,” and said that the Army would lend its full support to efforts made in this direction. Close on the heels, the Election Commission of Pakistan too landed a blow to Nawaz Sharif's sagging image.

Information leaked to the Pakistani media by the ECP suggested that though Prime Minister Nawaz Sharif had no assets abroad, he continued to receive colossal amounts from his son, Hussain Nawaz, who is settled in the UK.

According to the statements of assets for 2015, released amidst the ongoing controversy around the Panama Papers leak, which linked politicians with offshore companies, the value of the assets owned by the Prime Minister and his spouse comes to around Rs 2 billion — an increase of over a billion in just four years.

He had previously received remittances from his son, worth Rs 239 million, and Rs 197. 5 million in 2014 and 2013 respectively. Hence, the news of sacking of 12 Army officers for graft by General Raheel Sharif, coming as it does in the midst of debate over the credibility of Nawaz Sharif's family, does not augur well for the Prime Minister or his government.

General Raheel's stature has only been growing since his operation against terrorists. Pak media has also reported that #ThankYouRaheelSharif hastagwas trending on Twitter in Pakistan soon after the sackings.

So when General Raheel Sharif on Tuesday last said at the Signal Regimental Centre Kohat that “across the board accountability is necessary for the solidarity, integrity and prosperity of Pakistan,” adding that the war against terror cannot be won unless “the menace of corruption is uprooted.” Every word had been lapped up by Pakistanis.

Raheel added that “Pakistan’s Armed Forces will fully support every meaningful effort in that direction which would ensure a better future for our next generations.” “The ongoing war against terrorism and extremism is being fought with the backing of entire nation,” he said, emphasising the importance of rooting out corruption in the process.

If General Raheel was sending any message to the civilian establishment over the Panama leaks, he was unambiguously clear in stating that the political leadership should follow his footsteps.

Prime Minster Nawaz Sahrif should know better. After all, he has been sacked twice in his career earlier as the Prime Minister. He should also know that Raheel Sharif’s popularity grew out of the barracks and is spread across Pakistan, only the last year, making him more popular than any politician including Prime Minister Nawaz Sharif and Pakistan Tehreek-e-Insaf (PTI) chief Imran Khan.

A mosque in Islamabad was named after him last year and his portraits could be spotted on the back of trucks and autorickshaws in the country.

Banners and billboards featuring his image adorn the streets of almost every big city in Pakistan, particularly Karachi, and many contesting the recent local government elections in the country put his photo on their publicity material to attract voters, it was reported.

General Raheel Sharif may not move in for the kill right now, but Nawaz Sharif should bear in mind that no one would regret the move when he does. Perhaps, they might even welcome the same. So, is it time for Sharif to go?