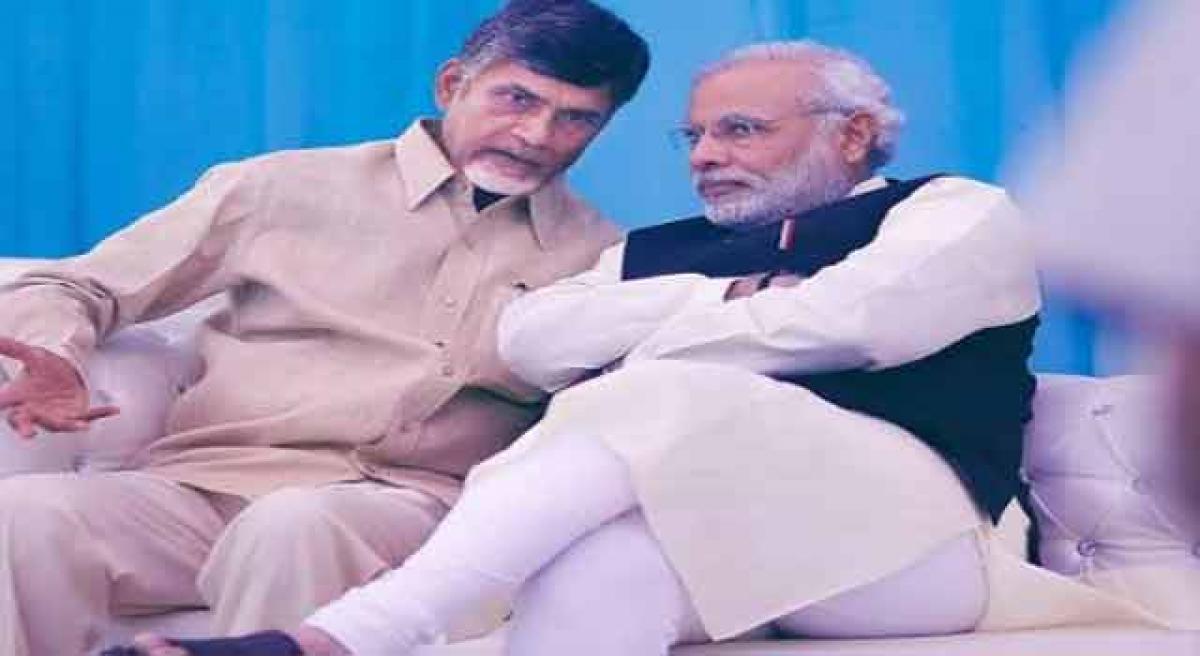 Reading Freud is one thing and reading him right is another. The Art of Psycho-Analysis is not easy to master. One may simply dismiss this field of science as stupid when it comes to politics. But the subtleties and the nuances have greater meaning than the mere words uttered by politicians.

Reading Freud is one thing and reading him right is another. The Art of Psycho-Analysis is not easy to master. One may simply dismiss this field of science as stupid when it comes to politics. But the subtleties and the nuances have greater meaning than the mere words uttered by politicians.

I was reading the statements of the AP Chief Minister, N Chandrababu Naidu, carefully of late. More so in case of the Special Category Status that he seems to be not so sure of seeking.

Now-a-days all developmental issues are leading to legal scrutiny some time or the other. Naidu cannot, in the first place, antagonise the BJP leadership in general or Modi in particular. He is fully aware of the powers of the Central agencies like CBI and ED.

He cannot go hammer and tongs against the Centre in this regard. Secondly, every time the TDP or the others raise the issue of Special Status, the Centre gleefully reels out statistics to remind the people of AP what all it contributed for its development. Naidu also is forced to admit that the Centre's holding hand is necessary

The tentativeness of it all makes me wonder whether Naidu should not have been more outspoken and more demanding. But then, could anyone say Naidu does not know how to frame his choices? Apparently not!

In a structured situation of the State-Centre relationship, a basic principle of one-upmanship is always found dominating. The gives and takes are guided by the sole principle of "controlling the situation" and nothing else. Hence, it is not easier to comprehend the other's moves always, more so in the backdrop of compulsions of electoral politics.

What exactly is this one-upmanship that is at play here in AP vis-a-vis the Special Status? The same applies within AP between the TDP and the YSRCP, too. It does not get reflected just in this aspect alone, but even in the defections that are being engineered in the two Telugu States of Telangana and Andhra Pradesh.

Be it in the studied silence of the Prime Minister, Narendra Modi, on the issue of the Special Status, or in the political slugfest over the defections in the State, a commonality found is this one-upmanship.

This quality or character on display is played in several hues of dominance. Learned men (in the field of Psycho-Analysis) have often defined this one-upmanship as an art of putting a person "one-down."

A three-volume work titled 'The Art of Psychoanalysis, or Some Aspects of Structured Situation Consisting of Two-Group Interaction Which Embodies Certain of the Most Basic Principles of One-upmanship' explains that in any human relationship one person is constantly maneuvering to imply that he or she is in a 'superior position' to the other person in the relationship.

This is relative term – this superior position. This is continually defined and redefined in any ongoing relationship. Maneuveres to achieve something could be crude or infinitely subtle. Here is where Chandrababu Naidu's preferences step in. He does not want to be crude.

He prefers subtlety while his bete noire opts for a more aggressive posture as he needs to do so to be in circulation.
The issue, however, is whether Naidu is forced to be subtle. Naidu certainly is not in a superior position to ask the Centre.

Hence he has to be suggestive always to imply that the State deserves it. Narendra Modi who pepped Naidu and the people of the residual State of Andhra Pradesh with his assurance on Special Status during his election campaign is quite effectively applying his knowledge in this regard to establish Naidu as inferior by forcing him to go to Delhi.

In seeking the Special Status subtly, Naidu is insisting that the Centre is one-up while trying to project it as one-down in his own backyard.

And the Centre insists that the State government remains one-down so that it could be one-up. Simple, eh? The truth is often bitter, and hence, the players in this psycho-analysis game do not openly accept the same.

Neither Naidu nor the BJP or friends. Their friendship or alliance is a situational demand. Modi needed Naidu by his side to ensure his victory and Naidu sensed his chances by the side of Modi.

The membership of this mutual admiration club does not remain constant. Such members of these clubs who often coagulate into these groups tend to become experimental in seeking greener pastures in their future pursuits and prefer to alter their political DNAs.

Both the BJP and the TDP are wary of this factor and hence the game continues to be played subtly. However much Naidu and his team try to establish AP's need for the Special Status, the Centre would not budge from its position of superiority.

If the BJP really wants to favour AP, it could easily work towards according the status in myriad ways. Naidu is aware of the fact that till the elections in neighbouring Tamil Nadu are complete, BJP won't even try to assuage his feelings in this context as the latter would never prefer to give the AIDMK an upper hand.

The Central leadership of the party (BJP) is not stupid to empty its pockets for AP and be left with nothing to claim for in future. It has already trapped Naidu in its bear hug and would not let him go that easily.

There are several issues that Naidu must be wary of. Now-a-days all developmental issues are leading to legal scrutiny some time or the other. Naidu cannot, in the first place, antagonise the BJP leadership in general or Modi in particular.

He is fully aware of the powers of the Central agencies like CBI and ED. He cannot go hammers and tongs against the Centre in this regard. Secondly, every time the TDP or the others raise the issue of Special Status, the Centre gleefully reels out statistics to remind the people of AP what all it contributed for its development.

Naidu also is forced to admit that the Centre's holding hand is necessary. That... Sir... Mr Naidu, takes away the credit from the TDP. The BJP would like to retain this lead over the TDP as it looks towards alternatives in bracing up for the 2019 general elections.

In fact, it was none other than the Union Minister, M Venkaiah Naidu, who set the ball rolling in this regard in an innocuous tone and tenor when he read out a long list of the "Dones'' for AP in the last two years in response to a question in the Lok Sabha. This was later picked up by his colleagues in the Cabinet.

Now everyone is parroting what all the BJP has done for the State in lieu of the Special Status. The long list includes the institutions sanctioned, big ticket projects announced, tax concessions awarded, investment plans in infrastructure declared, revenue deficit covered and loans and grants promised. Strangely, the TDP is also acknowledging all of these repeatedly.

The BJP leadership is positive that its image is not taking a beating in the country. The ongoing Assembly elections could further improve its image, it feels. There is little reason that it should concede all demands of its allies only to strengthen the latter. It is not a good math, at all.

The party is planning to look at all avenues in strengthening its base in the State and has already moved away from the TDP in Telangana unwilling to face set-backs for the former's fault lines.

It has experimented with the Kapu sentiment indirectly once in the State during the last elections and is looking towards the community once again.

It is also evaluating the usefulness of the disgruntled Congress and YSRCP leaders and is in contact with some already. There is little reason it would allow to become 'one-down' vis-a-vis the TDP, hence. And that is the real challenge the TDP faces in AP!