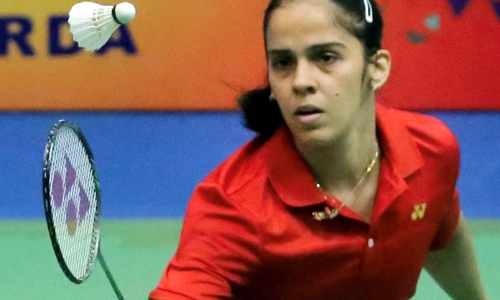 Saina Nehwals impressive run at the Malaysia Masters came to an end following her straightgame loss to reigning Olympic and world champion Carolina Marin of Spain in the womens singles semifinals, here Saturday

Tied 5-5 ahead of the clash, Saina had made a good start to the match leading 5-2 at the start but an aggressive Marin reeled off seven straight points to turn the tables before grabbing a 11-9 lead at the break.

However, Marin produced a determined effort to reach the game points after gathering six points on the trot.

She easily sealed the first game in 20 minutes with a measured return at the Indian's fore court.

In the second game, Marin was more dominant as she surged to a 6-1 lead early on and kept her stranglehold at the interval with a 11-6 advantage.

Saina tried to make a comeback but Marin was always a step ahead.

The Spaniard slowly created a huge gap which the Indian failed to bridge.

Saina saved one with a deep corner smash which Marin failed to connect but the left-handed shuttler produced a straight return next to seal the issue in her favour.